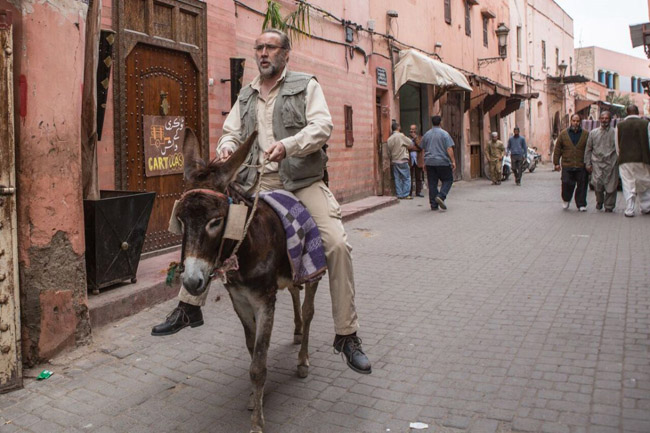 When dealing with a Nicholas-Cage-starring film, there’s a pretty equal chance of it being ingenious or being preposterous.

Unfortunately, Army of One sits so solidly in the mundane that it doesn’t deliver what every person watching a Nicholas Cage film seeks: entertainment.
Based on the real story of a man on a mission, Cage stars as Gary Faulkner, a seemingly slightly unhinged unemployed handyman, who is visited by God (Russell Brand) and is given the task to track down and capture Osama bin Laden. While working on his operation to get to Pakistan, he rekindles a high-school friendship with Marci (Wendy McLendon-Covey), a single and enthusiastic woman and mother of a disabled daughter, Lizzie (Chenoa Morison).

Coming from the director of Borat and Bruno, Larry Charles, a sense of raucousness and controversy is expected. However, when a film within this category doesn’t dare to push the boundaries like its predecessors, what is left is lifeless and unappealing to both the niche and wide audience, failing to win either through its lack of commitment and courage.

It’s hard to feel anything for this film when it doesn’t seem to want to decide on a style or tone. The good jokes being few and far between, and the most eventful moment being Gary failing to paraglide successfully off a cliff, the comedy fails to reach a level of satisfaction, which could have been the one saving grace.

There’s a mix of slapstick humour and well-received dry and witty remarks, which theoretically should tick the boxes for a wide audience. However, neither of these styles are worked with or carried through, the writing choosing instead to stay neutral and favour long periods of no humour at all, making the very few good jokes left in the dust as if they’d never happened – or perhaps they had happened by a fluke.

Gary’s relationship with Marci is a strange one, being that it’s hard to tell whether it’s performed straight or for laughs. It’s unconventionality sure makes it interesting but when surrounded by weak film, it’s difficult to not to assume it’s yet another aspect that doesn’t quite work.

The problem with casting Nicholas Cage in a film is that it then instantly becomes a ‘Nicholas Cage film’, inciting a whole different attitude and reception from an audience due to his work being a highly debated pop culture phenomenon. It’s quite possible that every aspect of this film could have been slightly elevated had Gary been played by an actor without a schtick that overshadows the character and essentially becomes said actor with a beard and high-pitched voice.

With such a colourful character and bizarre story to work with, it’s wholly disappointing that the result is so average. While not totally to blame, the casting of Nicolas Cage completely overshadows any chance of this film being the off-the-wall, wacky, absurd adventure it could have been, which is surprising considering Cage is an actor renowned for such work.