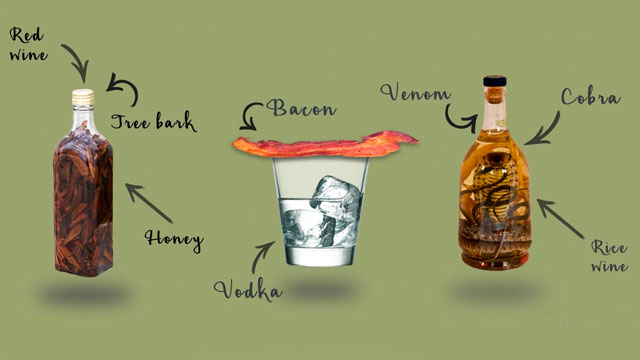 Getting a round in, sharing a cuppa or raising a toast… enjoying a drink together is a ritual at the heart of every culture.

If you’re a keen flavour fanatic and love to put your taste buds to the test, sampling a country’s craziest beverages should always be at the top of your bucket list. Travel comparison site dealchecker has created the ultimate list of weird and wonderful tipples that will quench your thirst and satisfy your adventurous spirit. Pull up a bar stool, we’re going around the world in 21 unusual drinks! Mongolia
Airag
Airag (fermented mare’s milk) is a national delicacy in Mongolia, with natives swearing by its refreshing properties.

Vietnam
Weasel Coffee
If you like your morning mugful with an extra kick, why not try Vietnamese Weasel Coffee, made with beans that have been digested and excreted by weasels.

Laos
Snake Wine
A controversial tipple with a real bite, Laos’ snake wine is made by fermenting rice wine with the body and venom of a cobra! Fiji
Kava
Made from the root of the Kava plant and traditionally pre-chewed by virgins before being fermented, this potent spirit is sure to put hairs on your chest.

Cook Islands
Tumunu
In the Cook Islands, bitter oranges and creamy coconuts are combined to create a truly tropical (and powerful) punch.

New Zealand
Horse Sperm Shots
Want to make a pint in your local more interesting? Head to Wellington, where a now world-famous pub have a shot of apple-flavoured horse sperm on offer.

North America and the Caribbean

Canada
Clamato
As Canadian as maple leaves and poutine, this odd (yet surprisingly tasty) concoction consists of tomato juice and clam broth.

Dominican Republic
Mamajuana
A mixture of rum, red wine and honey, this Dominican delicacy is left to mature in a bottle stuffed full of tree bark. USA
Bacon Vodka
Because there’s nothing the Americans don’t believe can be improved with the addition of meat, bacon-infused vodka is the latest spirit to hit the US drinks market. Peru
Frog Juice
As unappetising as it sounds, rural communities in Peru insist that a shot of pulverised frog will sort any ailment from stress to chronic pain.

Iran
Dugh
This smoothie-esque delight is made from yogurt, mint, cucumber and rose water, and is a staple in Iran’s desert regions. Kazakhstan
Chal
Fermented camel’s milk known as ‘chal’ is the bevvie of choice for many Kazakhstanis at the end of a hard day.

Denmark
Gammel Dansk
Looking to jazz up your Shreddies? Make like the Danish, and down a shot of Gammel Dansk, a dizzying spirit traditionally drunk with a morning meal.

Bulgaria
Rakia
Sometimes reaching a dazzling 90% proof, Bulgaria’s Rakia is made from fermenting a selection of fruit including grapes, plums and cherries.

Italy
Cynar
This Italian speciality is usually enjoyed as a ‘digestivo’, made from artichoke and often mixed with orange juice.

Uganda
Waragi
Uganda is famed for its fiery and unique-tasting banana gin, and it’s a staple of any local drinking session.

South Africa
Amarula
Amarula is made from the fermented fruit of the Marula tree, which South African animals have been known to eat to deliberately intoxicate themselves.

Namibia
Mataku
Can you imagine a more refreshing end to the day than a chilled glass of Namibia’s watermelon wine Mataku?