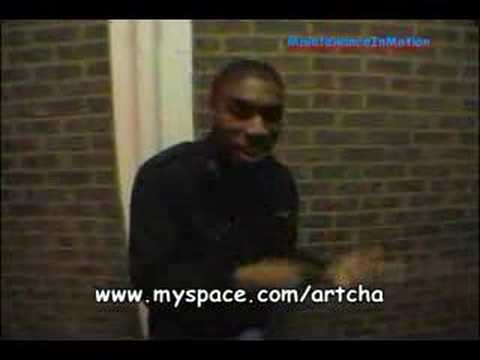 Sagging jeans, hoodies and over-priced jewellery. These are the trappings typically associated with a UK hip-hop artist. Meet Artcha: stylish spectacles, smart sweater and dress pants. He is quick to inform me that numerous meetings are the reason for his attire. I get a sneaky suspicion that he rocks the smart guy look from time to time and not just for formal occasions. And why not, when it suits him so well.

Spoilt for choice from the many bars in Camden we settle on Bar Uno, an intimate spot with low lights and good music. Amongst the sparse midweek revellers we settle down and begin to talk.

Far from being a newcomer to the scene Artcha has been around since 1996. Forming the One Crew with other rappers from North London such as Sway, then going solo and releasing the Therapy Sessions Mix tape: Chapter 1. Eventually releasing his debut album Therapy Sessions in 2005, featuring the hit tracks Fatal Beauty and The Hype. The album was released through the independent label The Schizofreniks, who also produced a few tracks. It crossed a number of musical genres including salsa, funky house and reggae – a reference to the 27-year-olds Jamaican heritage.

xxxxxxxxxxxxxxxxxxxxxxx
Now 2008 and Artcha is working on his as yet untitled sophomore release. With promises to be just as eclectic as the first he says, ‘this album is a syndication of a lot of things. The sound is very electronic and very up-tempo. It’s music that’s going to make you move.’ With new experiences, the new material looks set to reflect a more mature Artcha in terms of concept and lyrical content, especially in regards to relationships and ‘feelings that men don’t always talk about.’

This time around Artcha is looking for more support from the commercial radio stations. Competing with major labels and artists from the US there appears to be a battle for UK artists, from a hip-hop background, to be played on UK airwaves. A topic Arctha is passionate about. ‘Radio has a responsibility to communicate all types of music,’ he informs me. Then questioning himself he asks ‘or they should have the responsibility to do that?’

In everything Artcha creates he aims to be true to himself first. For that reason, not everyone was completely happy with his debut. ‘Some people were pleasantly surprised, some were disappointed that I didn’t just stick to hip-hop. But that is how I was feeling at the time and I’m proud of it.’

No surprise to learn that having studied Film at university and being a natural film buff, Artcha is trying his hand at acting. Commissioned by the Bernie Grant Arts Centre, he has devised a play with choreographer Katie P. With the working title Addi-diction it attempts to ‘explore the demise of a human being through an addiction’ – to trainers.

When not working in the studio or flexing his acting muscles, Artcha is one third of 3ME (Three Musketeers Entertainment). An entertainment company which he owns and runs with long time friends-cum-business partners Charmer and Malone. As well as working for the voluntary organization Health for Haringey, which helps to fund community based projects.

Not trying to have too many fingers in too many pies, Artcha feels he is just sharing different elements of himself through all the work he is involved with. ‘I’m not really trying to prove anything to anyone. Whether you hear me on a track, see me in a video, on stage or in a film. That’s all me and that’s all I’m trying to show.’