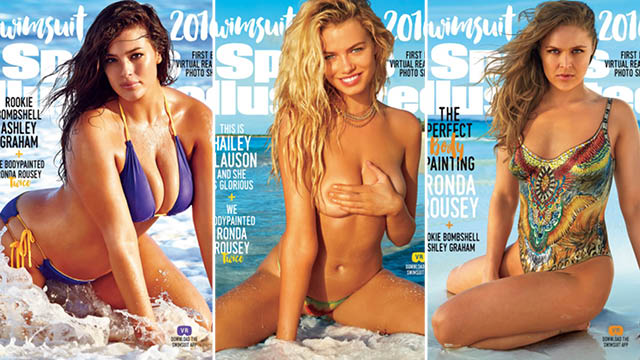 Ashley Graham the plus size beauty that we always feature on Flavourmag.co.uk looks stunning on the cover of Sports Illustrated Swimsuit 2016 and shows that curvy girls ROCK!

Ronda Rousey, the UFC champion before her defeat, looks dreamy on the beach rocking her amazing bikini body, drenched in sun and sand.

Agent Provocateur model Hailey Clauson goes topless for her SI cover and shows us why she is one of the hottest models on the planet right now.

The 2016 issue includes 24 women in all. Check out the full list of Sports Illustrated Swimsuit 2016 models below:

This is the first time in 52 years that there will be three different SI Swimsuit covers, as Ronda Rousey, Ashley Graham, and Hailey Clauson were surprised with the news that they’ll each share the honour of being the 2016 SI Swimsuit cover model. On choosing Ronda Rousey’s cover: “Ronda Rousey is a cultural phenomenon. She is the perfect combination of beauty, brains, brawn and humility. She possesses a spirit bigger than the space around her, and it is both infectious and inspiring. She’s a Phoenix, as fiery and beautiful as any mythical creature ever depicted.” On choosing Ashley Graham’s cover: ” Ashley Graham is a sultry, feminine masterpiece. I dare you not to stare at her. Ashley commands your attention in her photographs. She owns her sexiness in a way that every woman should. Her confidence is contagious.” On choosing Hailey Clauson’s cover: “Hailey Clauson is the definition of a modern bombshell. Learn a little about her and you’ll appreciate her beauty even more. Even as unsettling as her beauty can be, one minute in her company and you’ll feel like you’ve known her for years.”

Go to www.si.com to see all the images and videos