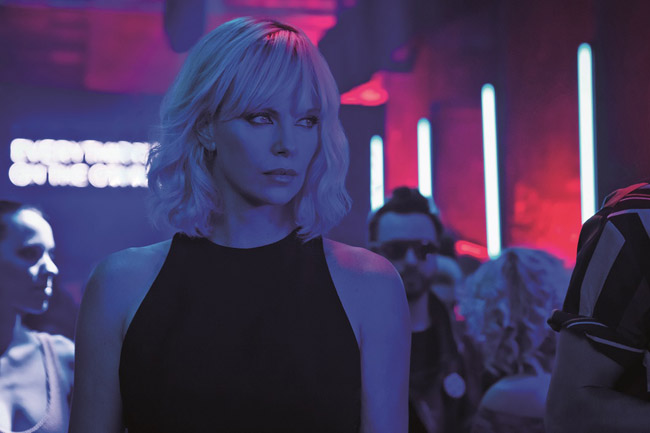 Doused in 80’s pop culture, a fierce female fighting machine, and kickass choreographed fight sequences; Atomic Blonde is all about atheistics as Charlize Theron flaunts her deadly womanly wiles through the tail end of the Cold War with brutal force against any man that dares to step in her way.

Dubbed the female John Wick, and rightly so with said franchise David Leitch at the helm, combining the quick, slick and brutality we have come to look on in awe in Wick with an exceptionally impressive eight minute long, one take shot of Theron kicking and punching her way out of a building, down a spiralling staircase and sprawling through rooms, grabbing anything that comes to hand as a weapon. The Political woes of the 80’s give us the relevant tie-in with the world we live in today but with a little extra spice with a sexually charged lesbian encounter.

Lorraine Broughton (Charlize Theron), one of MI6’s top agents, is brought into the fold for a new assignment when a fellow colleague is slain in Berlin and a top secret list of spies goes missing. Deployed to the murky, seedy side of the city, Broughton has to track down the murderer with the assistance of her fellow MI6 colleague, the man on the ground and instantly untrustworthy David Percival (James McAvoy), but it’s never going to be easy with the KGB and other interested parties waiting for her arrival.

Dressed in her knee-high, spiked boots and giving any supermodel a run for their money, Broughton teams up with the womanising, charismatic yet rogue law unto himself Percival who has his own agenda. It appears that all top spies are looking for this all important list as at every turn, the blonde bombshell has a fight for her life on her hands.

It’s not just the influence of John Wick which has made an impact in Leitch’s latest; elements of any Bond rear its head from character characteristics to its spy thriller foundations, there is no second guessing as it’s hard not to know what is coming at every turn of the corner, even it’s so called plot twist(s) which burst into life in its dying scene is inevitable from its first third.

Theron may be a tour de force but with its translucent plot influenced heavily by a straight man’s wet dream, her turn as the female lead makes no significant point in portraying women in any other way but an ice cold sexual object whether it be bruised and battered in a bath of ice, chugging away on a cigarette, or sexually entering a room clad in nothing but an oversized but seductive Boy London T-Shirt, she lacks any emotional core. The brilliance of McAvoy is wasted too, he quite rightly takes a back seat to Theron’s protagonist but his arc is all too familiar with expected surprises.

Steeped in style, but lacking in substance it provides a knockout punch in the action stakes, however, heavily aimed at the male gaze with its sexual core and fuelled with gender stereotypes it loses any kind of credibility.

Atomic Blonde is out in cinemas August 8th