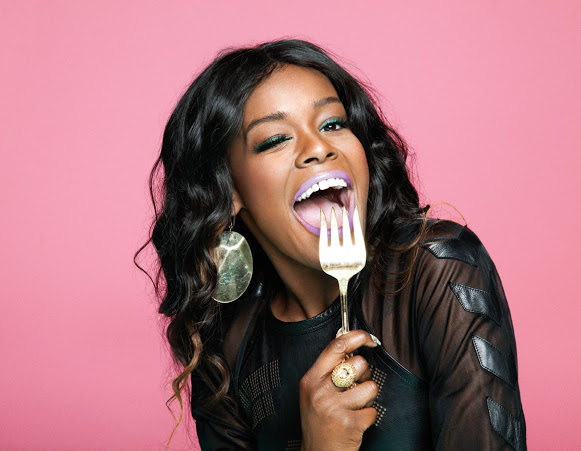 Today, Azealia Banks announced her partnership with Soundcloud, BitTorrent Bundle and MTV for a very special remix opportunity. Music fans and producers worldwide now have the ability to remix Azealia Banks’ new single “Chasing Time” for a chance to be heard and handpicked by the star herself and win $10,000.00.  The chosen track will be the first official remix release for “Chasing Time.”

Stems to “Chasing Time” are now available exclusively via BitTorrent Bundle and Soundcloud. All entries must be received by Monday, December 15th for a chance to win $10,000.00.

Azealia Banks released her critically acclaimed debut album “Broke With Expensive Taste” worldwide on November 6th. The album is available now on iTunes, Amazon and Spotify and will be available in stores worldwide in early 2015.

Watch the video for her current single “Chasing Time” below

After the longest wait ever and the biggest album date push back in music history, Azealia Banks has finally dropped her highly anticipated debut album “Broke With Expensive Taste”.

The bad girl of music was quick to state just how much hard work she personally put into this record and how little support she received from both record labels Polydor and Interscope! The US artist took to twitter to clear a few things up and one who has never been afraid to speak her mind, we wasn’t that shocked to hear her voice her dissappointed.

With a negative tweet reading “@AZEALIABANKS: I know this is hella petty, but I need y’all to know that I a&r’d that record myself.. No help from polydor or interscope.” and a self praise tweet reading “@AZEALIABANKS: I am the executive producer, everything…. ,my blood sweat and tears literally went into the making of this album.” here at Flavourmag we were extremely interested in hearing the final product. Impressed is not a big enough word in my opinion…this albums sound is dope and right on point! The first four tracks have a massive old school garage vibe to them which is pure genius. With the 90’s back in full swing and with acts like Disclosure making garage cool again there could not be a more perfect time to release music of this style. The beats go so hard and make the tracks perfect bangers for the popular club scene. Of course the album features her bigges hit to date “212”. This being the first release from Banks was clearly an impressive move because it took the charts by storm and kept the name “Azealia Banks” in our memory. The track was named after the area code of Azealia’s home town in New York and samples track “Float My Boat” by Lazy Jay.

As the track list moves on it showcases the rappers more Hip Hop roots with a large element of RnB thrown in too. This is sure to grab everyones attention. BWET samples so many different music genres that no matter your preference or taste, it has something for everyone to enjoy. It is sure to become one of those albums that you always listen to all the way through without skipping a single track…just what an album should be!

With few single releases and little promo to none at all, the fact that the album has debuted at number three in the US iTunes chart (07/12/2014) it clearly shows that this loud mouth chick is still very very relevant. It’s a sign not to sleep on this female talent! Pick up “Broke With Expensive Taste” on iTunes now – https://itun.es/gb/bjD53

Here at Flavourmag we are super impressed with BWET and have the record on constant repeat. What are your thoughts? Let us know below and make sure to follow @Flavourmag on Twitter.