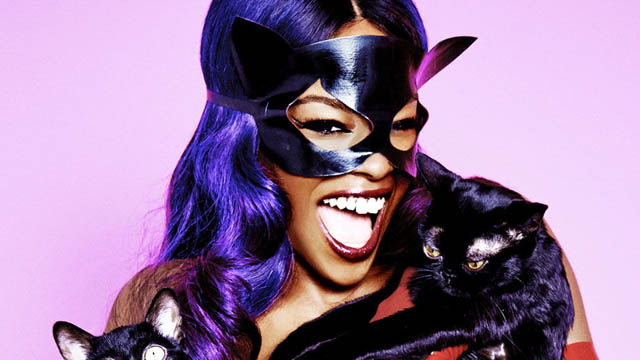 Azealia Banks playboy images have now been released. And guess what? The probably wont break the internet.

The reason being is that you have to buy the print edition of Playboy to see the full nude shoots. For the past few days we have had so much hype around the Azealia Banks Playboy shoot, rumours where circulating that we may see a full nude shoot etc, however the online reality is a little less exciting.

We love the photographs seen below and you need to go and read the full article on playboy.com/articles/azealia-banks-playboy-photos sporting a sexy catwoman look, Azealia Banks photo’s are far less provocative than the rumours that where being spread over the internet. We feel a tad disappointed, but to be fair we love that fact that she has kept it all covered up for the online release.

You’re bisexual. Do women hit on you often?
No, most women are scared of me. People have always been scared of me. I punched my teacher in the face one time when I was in preschool. We were playing house, and the lady was like, “I’m a monster! I’m gonna eat your family!” I punched her right in the eye. [laughs] It was a Head Start program, so I was three.

See the gallery below and watch the behind the scenes video from the photo shoot. Are these photos provocative enough to compel you with enough velocity to got out and buy a copy of playboy magazine? Leave your comments below.

Behind the scenes of the playboy shoot