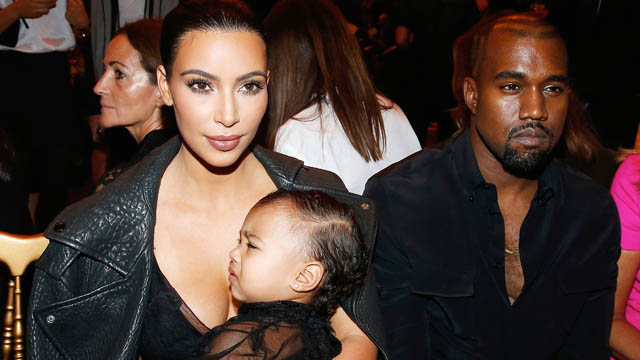 From time to time I’ve imagined my life how the others live, fantasising that I was born into the lifestyle of the rich and the famous…

Haven’t we all? Sure, we’d be dressed from head to toe in designer, more than likely to own a few homes across the globe, experiencing the best education known and probably the best bit, travelling all over the world throughout the year instead of counting down the days to the annual holiday to Tenerife. That all sounds seemingly well but whilst we’re admiring the positives, let’s take a glimpse into the negative.

Let’s look at life from the prospective of a wee nipper born into the world of LA LA land. Not a day goes by that Kim Kardashian, Kayne West and baby Nori West aren’t mentioned in the media. Her parents are notorious forces, her mother; notable reality star and more *wink wink*, her father known for his wacky and egotistical ways on stage and off aren’t likely to offer their offspring the shy and retiring life she may one day crave but is that their fault? Coming from a family dynasty where their every move is captured and reported is it a shock that Kim would digress pictures of her baby as she grows? After all the media will no doubt issue their own pictures and gain money from this. Pictures from the couple themselves provide these tabloids with news stories that readers obviously love anyways.

From a supporting side I’d say there’s nothing wrong with Kim and Kayne sharing pictures of their only child. As one of America’s power couples, they’ve been strangely and rather overwhelmingly likened to royalty and like UK royalty they’re more than happy to share their joy and momentous moments with the rest of the world. In fact it is expected and almost worshipped by fans and trolls alike! If you knock Kim then perhaps we could say that you should be knocking Pippa Middleton and Prince Harry- surely baby George deserves some shade from the limelight.

Like any proud parent, it’s inevitable that you may want to share those precious moments, the only difference is that a few million can see theirs instead of your hundred or so. Kimye (Kim and Kayne) are hounded by the press and so it’s without doubt that their child would be papped on a day to day basis. At least with instagram they have some degree of control over the images they wish to share with fans and the pictures that are used are your usual and extremely cute family shots of embrace… That’s not hurting anybody is it?! Nori isn’t being degraded is she!!? Although Kim was recently blasted for cropping Nori out of a picture she had shared, it just means that she has to deliberate what her picture cropping actions mean to the rest of the world. Can this woman ever win?

I don’t think Kim uses her daughter as a publicity tool because quite frankly she has other assets that we’re aware of but perhaps she does use Nori as an accessory. Their outfits usually match but is that such a crime? Many non famous mothers wear Mum and mini me outfits and you don’t see people crying about that.

I will agree that some celeb parents do use their children for publicity, where would certain magazines be without that exclusive first shot of a newborn baby? It’s the name of the the game and it pays the bills. A posh mum who goes by the name of Victoria Beckham had come up in talks relating to this topic and I have to say that she is a teeny bit guilty of using her children for publicity but I can understand. She comes from a brand, brand ‘Beckham’ and if opportunities arise to make money then she’ll invest and that’s why we’ve seen some of her children take part in ad campaigns for the likes of Burberry. Why should this be acceptable from Mrs Beckham but not from Kim Kardashian?

One celebrity mother who is handling motherhood and fame very well is Rochelle Humes of The Saturdays. She regularly post pictures of her daughter Aalia Mai but with one difference, not once have I seen her uncover her baby’s face. Aalia is usually photographed from behind or her face is filtered by an object. This is a great idea as her fans still get to watch this family grow but the child’s identity isn’t exposed. Fortunately for Rochelle she’s a loveable character and doesn’t seem to be chased by the paparazzi whilst out with her daughter.

In society now it’s part and parcel of life to share pictures of our children as they grow- the photo album seems to slowly be disappearing but the good thing about our online albums is that it can never be destroyed, the bad bit about that is that it could inevitably be hacked into or accidentally deleted.

Michael Jackson was someone who people would perhaps say was overly protective of his children, ensuring they wore disguises and face masks to shield them from the glare of following paparazzi. Who are we to judge how far someone is going to go in order to safe guard their children or little they will safeguard? The King of Pop was mocked for his barmy masking ideas and you could say it made people even hungrier for information on his apparently strange daddy duties but I don’t think he would have won either way.

You may trust the people that follow your daily life on social media but then again a lot of us probably have people that we barely know, so isn’t that really just the same as Kim Kardashian posting a picture of her child and allowing others to view. The Internet can be a discerning place and you hear about images getting into the wrong hands, instead of judging celebs and preaching on our soap box, maybe we could unite in understanding that these are just proud parents, albeit famous ones.

The eventuality of the matter is that there really is no easy way to bring up a family within the media because it’s not any easier bring up a non famous family. In my opinion it is something of luck and lies in the stature of your fame. The less fame, the easier it is to carry a relatively normal existence, who knows, the paps may not even notice you from time to time. For someone better known, it’s hard to hide your children when reporters are camped outside your house or better yet following you around town.

In all seriousness I think the only way to give famous kids anonymity is to leave the fame game, but then what would we be gossiping and cooing about??