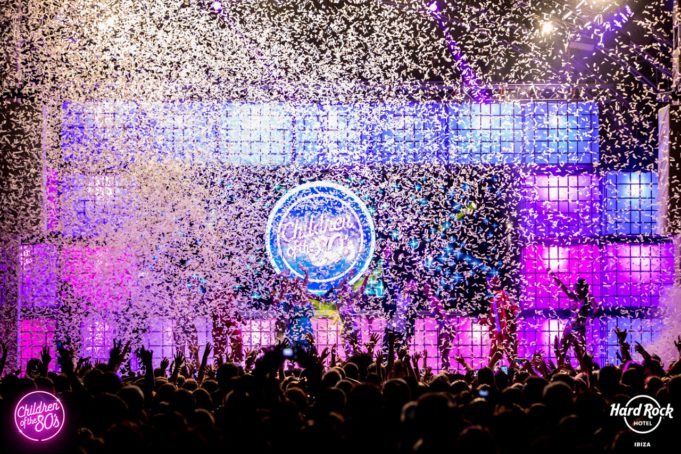 Children of the 80’s is all set to return to the Hard Rock Hotel Ibiza, starting Every Friday from 01 June until 28 September 2018. Plus there’s Free access for hotel guests, Ibiza residents and those wearing ’80s outfits. Whoop!

With summer 2018 just around the corner, ‘Children of the 80’s’ is preparing to celebrate its fourth consecutive season at Hard Rock Hotel Ibiza. Launching 1 June and running until 28 September, the island’s must-attend party will bring back its old-school vibes, eighties tunes and retro style every Friday to the beachfront hotel on Playa d’en Bossa.

The weekly ‘Children of the 80’s’ parties will take place around the open-air, poolside stage at Hard Rock Hotel Ibiza, featuring live performances by ’80s and ’90s music legends. The lineup will be announced ahead of the opening party, but party-goers can expect to be entertained by the likes of Corona, Ultra Nate, Barbara Tucker or Rozalla, who have all graced the Hard Rock Hotel Ibiza concert area in previous years.

Children of the 80’s 2017 gallery to whet your appetite

After the phenomenal success of the past three seasons, every Friday event will also feature Quique Tejada, Toni Peret and José María Castells, members of the DJ trio Dream Team Reload, as well as Petit & Vázquez, creators of the popular La Movida Ibiza party.

This is what happened when Flavourmag went to a ‘Children of the 80’s’ party in Ibiza last year. It was simply too much fun. It’s time to come together and CELEBRATE!!!

From 7pm to midnight each Friday, for five fun-filled hours, attendees of ‘Children of the 80’s’ will enjoy a trip down memory lane with the best hits, costumes and dance moves from yesteryear.

For more information and to book, visit www.childrenofthe80s.com

If you love Children of the 80’s and can’t wait until June, you probably love KookyLoco at the Tropicana Beach Club London 6th May 2018.