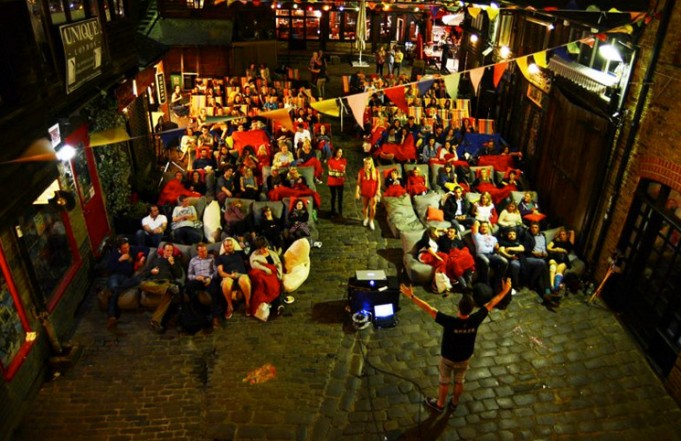 An Interactive, atmospheric, outdoor cinema to conquer all others. 20 shows, over 8 weeks on the iconic cobbles of Camden Lock Market. 200 giant beanbag loungers and deck chairs to relax in while you watch a blockbuster film selection on huge 14ft screen with booming speakers.

Not just the films: With Brewdog as the official drink sponsors you know its set to be a party. 1950’s Usherettes serving ‘beer for punks’ right to your seat as well as frozen cocktails, summer special spirits, ice cold wine and soft drinks. Interaction encouraged with live twitter competitions, sing and dance-a-longs & Live DJ’s to get the evening going.

Peckish?: Honest Burgers as official food partners have created a dedicated Backyard Burger cooked and served with their world class chips from the huge popup BBQ within the cinema (veggie options available).

Extras: With popcorn, blankets, cupcakes, short films, special surprises and live DJ’s before the feature this is not your average outdoor cinema, this is Backyard Cinema. More than just the movies.

Dominic Davies, Founder and Creator says: “This year we wanted to go even bigger – more beanbags, bigger screen, more films and louder speakers. Brewdog and Honest Burgers are on side to finish the job and this year we really want crowd interaction. This is Backyard Cinema not the opera, lots of drinks, lots of food, a great movie in an iconic setting. One of the joys of going to the movies was that it was trashy and we should never lose that. This is the ultimate pop-up Cinema.”