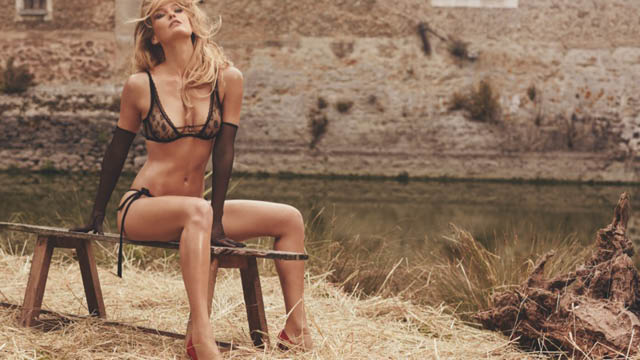 Following on where Naomi Campbell left off, sees Bar Refaeli in what seems to be her HOTTEST campaign yet for one of our favourite lingerie brands Agent Provocateur.

Former stars of Agent Provocateur campaigns have seen as previously mentioned, Naomi Campbell, Kate Moss, Abbey Clancy, Paloma Faith and for its spring-summer 2016 advertisements, the star power is also undeniable with the addition of Bar Refaeli. Photographed by Sebastian Faena with a country girl theme, rolling around in the hay and wearing the exquisite Agent Provocateur collection, Bar Refaeli owns the shoot in these sexy lingerie looks. Wearing everything from lace bra’s and panty sets to sheer bodysuits with hoisery in the sexy advertisements, the photographs are truly stunning and the weather for the shoot was actually quote grey. “Thank God for Bar,” Agent Provocateur’s creative director Sarah Shotton told WWD “She was a really good sport, waiting in the stables until the sun came out. And she is really hot — you can’t look like that and feel the cold.”

See the images for yourself below and if you are tempted as much as we are then simply shop Agent Provocateur NOW!