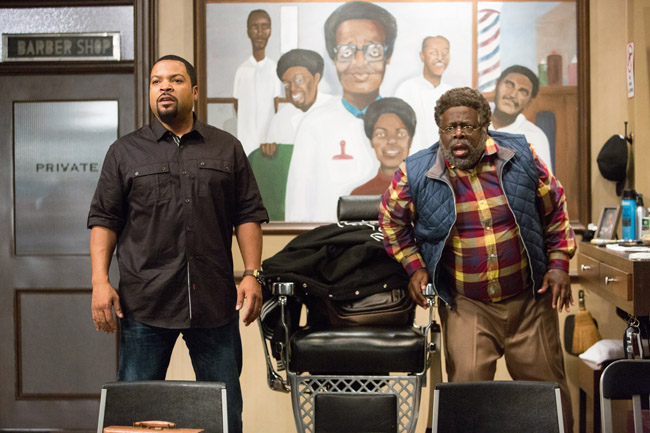 Back in 2002, a new cult movie was born in the form of Barbershop with rapper turned actor Ice Cube taken the helm as Calvin Palmer, Barbershop owner.

Now 14 years later the third film in this trilogy, Barbershop: A Fresh Cut, is back with old faces, Cube, Cedric the Entertainer and Eve giving us a film with a social theme fitting for our times.

Now with Director Malcolm D. Lee, a cousin of Spike Lee, as Director, Barbershop has been given an injection of commercialism, one that will appeal to a wider range of audience that this trilogy has been lacking in the past, with the casting of Nicki Minaj as a feisty loud mouth who uses her physical charms to cause trouble – Not much acting needed on her part then!

Black on Black gun violence has been a major issue on the streets of America for longer than is socially acceptable but it’s still an issue and Palmer – now a father to a young teenage son – he worries for his son’s safety on the streets of Southside, Chicago. The Barbershop has now been divided into two; with Palmer going into partnership with Angie (Regina Hall) the daily routine has the men against the women. Sexism is rife amongst the men and the women give as good as they get. Sick of the gun violence Palmer – who is fighting with a decision of his own to move the shop to a safer neighbourhood – takes matters into his own hands. He asks the two rival gangs (Jamal Woolard who played Biggie in Notorious and Renell Gibbs) to come to an agreement which see’s a ceasefire for one weekend, the Barbershop as Switzerland with the team giving away free haircuts. Fuelled with high spirits and scathing digs which include a swipe at R Kelly and his involvement with child video’s as well as taking pot shots at Kim and Kanye.  Their efforts don’t go unnoticed, as their campaign gets the attention of a radio station their shout out turns into a dance sequence to Luther Vandross’s Never Too Much with Common giving a breathtaking break dance move. While all of this takes place Calvin’s son faces a tough dilemma of his own.

The cast is pivotal to the success of making a heavy subject so light, but Minaj and her distracting booty at times deliver lines that are completely unrecognisable and it does have an air of predictability in its story. What is inspirational is the overly used N-word has been, in the majority, replaced with the word Negro which gives it a more respectable feel for its characters.

Surprisingly, everything about Barbershop: A Fresh Cut gels and works not just on a social level but on a communication is key message too. Targeting not just its younger audience, but those who have lived through the oppression and come out alive on the other side.

Barbershop: A Fresh Cut is out in cinemas June 17.