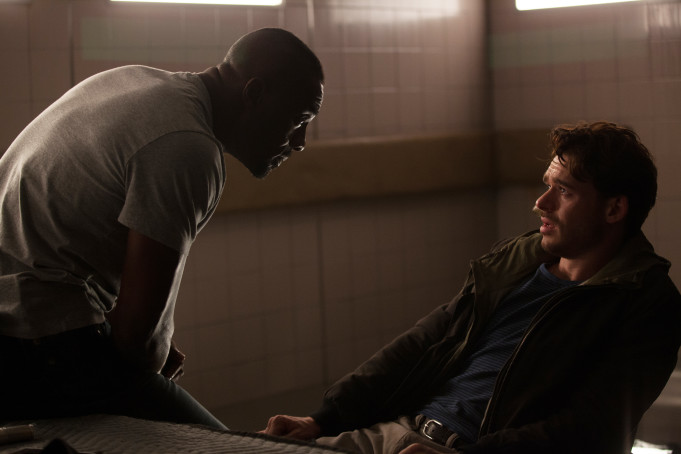 If Idris Elba hadn’t made a strong enough case to be a contender to take over the reins from Daniel Craig as Bond then his kick ass, slick fight scenes and his deadpan face in Bastille Day surely has to put him right at the top of the list for the most prestigious role an actor could hope for. He certainly gets our vote.

Bastille Day has a main cast of Richard Madden (Game of Thrones) playing Michael Mason, an American living in Paris who just so happens to be an expert pickpocket that carries out his crimes with precision and flare almost like a well-choreographed dance scene. In fact, the opening sequence sees’s him glide amongst a crowd of onlookers who are gasping as the naked lady walking through the square in lady Godiva fashion, all of which is set up for him to pull off as many wallet stealing opportunities as possible.

Unfortunate for him, he ends up being chased down by American and French authorities when he steals a bag which turns out to have nothing of any value and dumps it, which then proceeds to blow up killing and injuring innocent passer’s by. Sean Briar (Idris Elba), a giant of a man compared to Michael is assigned to find him and take him in leading to a chase across the rooftops of Paris, in true Spectre style, where Sean finally catches up with him. This is where a beautiful friendship between the two men begins as Sean realises Michael is innocent and he is being used for a much bigger game.

It’s an unlikely pairing with Madden and Elba but the chemistry these two have on screen together makes for a humour filled, action packed story. Under questioning from Briar, concerning his innocence, Briar states running isn’t the sign of an innocent man, in which Michael replies have you seen you? Elba’s deadpan expression, just staring at the man in acceptance without even cracking a smile, makes the humour so effective. Throughout the film, Madden is almost like an excitable child who has been taken under the wing of their hero, testing Elba and sometimes surprising him with what he can do. What so many films lack of this genre to keep its audience fully engaged is a twist you simply don’t see coming. Bastille Day delivers not one but two of these when we find out who the real masterminds are of the terrorist acts and exactly why they are carrying them out. The reason, the biggest heist at the Bastille that will make many men rich. Briar, with his big and brooding stance, as you can probably guess, doesn’t follow orders very well, and it’s against the orders of the CIA he recruits Michael to help track down and take out the real criminals of corruption no matter who they are, making them both a target for danger. Another major surprise is that Bastille Day is directed by James Watkins, the man responsible for The Woman in Black and Eden Lake. Considering his last film was essentially a ghost story he certainly knows how to make an entertainingly engaging action film that will appeal to a wide range of audience. It’s only downfall may be the timing of release considering its opening plot line is terrorism.

Bastille Day is out in UK Cinemas April 22.