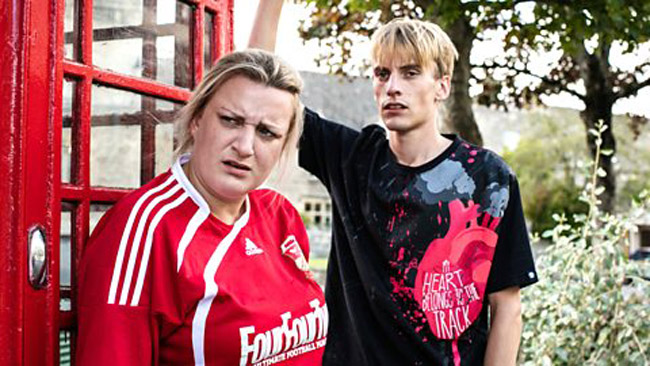 On Wednesday the 8th of February, BBC Three launches a brand new comedy mockumentary series which isn’t so far from the truth. This Country looks at the prospects and lack of aspirations of the young living in one particular sleepy village.

This Country, which is based over the period of six months, states that in ‘rural Britain studies show how young people feel more marginalised than ever’. Over the course of six episodes, which run at approximately 20 minutes each, we follow two young people from the same family in a small Cotswold village. Cousins, Kerry and Lee ‘Kurtan’ Mucklowe played by Daisy May Cooper and her real-life brother Charlie – who have also written the series – are best friends who go everywhere together, even though they have their many gripes with one another, like any normal family, they are fiercely protective of the other.

In many ways, This Country has a feel of Matt Lucas and David Walliams’s Little Britain about it, the laughs aren’t as raucous but more of a quiet, subtle disposition, both characters come from a family of what the likes of the middle classes and upwards would call the dregs of society. From Kerry’s love of wearing a Football shirt and reckoning she is ‘hard’ and people are scared of her to Kurtan’s dated hairstyle, which is reminiscent to that of The Office’s Gareth Keenan, but it’s obvious from the outset that Kerry is all front who at times can be quite articulate. Deep down she is a big softy at heart and both – even if they do swear like troopers – show an immense amount of promise if only their environment would allow them to grow.

With a lack of jobs in the village and any real prospects for the pair they bumble around the village offending the locals – at one stage the pair wanders through the village celebrating the fact one of their old teachers is dead by singing about it at the tops of their voices – and generally causing mischief. The only person in the village who tries to help them over their ‘Anger Issues’ is the village vicar. With each episode we delve deeper into our characters lives while laughing at their antics and misfortunes you can’t help but feel sorry for them all the same, making the audience care about them.

Kurtan goes through some pretty hard knocks, starting in episode one with his injustice felt that he was kicked out of the Scarecrow festival. He wears his heart on his sleeve and shows he is just a tad bit eager when it comes to dating, resulting in his complete and utter failings with a girl he asks to marry him on their first date. By the end of the series, Kurtan has had enough of the village and wants to move away to go to college. Kerry’s life in comparison is just as sad and pathetic, she hangs around a group of year seven’s for friends, idolises her peeping Tom of a father who shows her no love, she even tries to become a saleswoman but finds herself suckered into a pyramid scheme which doesn’t end well.

It may all seem like gloom and doom, and for the most, it is for these dead end youngsters but the comedy is as ripe as their tracksuits, heartfelt and funny we can’t recommend this series enough.