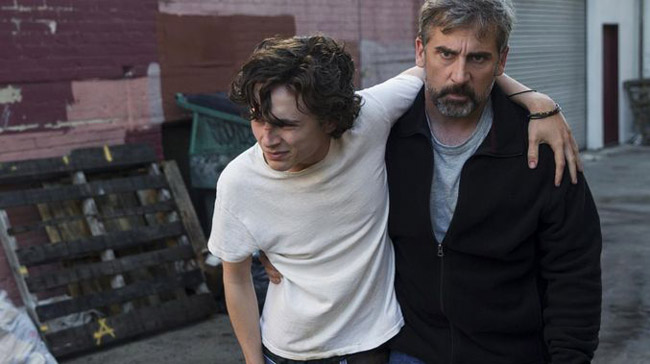 The subject of drug addiction depicted in film, more often than not, usually takes the viewer on a trippy ride of euphoria but director, Felix Van Groeningen takes a different route basing his latest on the memoirs of a Father dealing with a son on Crystal meth and the thankless task of aiding in his reluctant sobriety.

Dealing with a loved one in the midst of addiction can be a frustrating journey; David Sheff (Steve Carell) learns that with hair-pulling aggravation. Starting the film on the hot foot, Van Groeningen takes a grip of the picture with Sheff, under no illusion, in a drug addiction centre seeking advice on how to assist his son, Nic (Timothee Chalamet), off the drugs and transform back into the boy he used to be.

Separated from Nic’s Mother, David had custody of Nic as a child, integrated with his new wife and young children, Nic nothing wanted for anything. He was never neglected and was doted on by his loving father so it’s hard to fathom why Nic ever spiralled into his hedonistic lifestyle of addiction. Starting on a joint or two his desire to fill a ‘void’ was never quite fulfilled resulting on his need for something stronger.

It’s a classic tale of parenting self-doubt, full of anguish David battles with his memories, struggling to find where he went wrong and what he could have done differently in order to stop his son from ever experimenting. These memories take their toll on David, a toll where he finally realises there is simply not more he can do if Nic doesn’t want it too. David’s memories are played out via sometimes informative scenes in which we see the pair talking in the garden while Nic puffs on a joint, with David less than reluctantly joining his son, but these often, jarring flashback’s seamlessly connect to the present leaving a feeling of confusion.

There are tender moments of emotional support with sputtering of realness indulging in Nic’s world of desperation. But on the whole, it avoids the harshness reality with a repetitive and often messy rollercoaster ride making you want to slap everyone on the screen to bring them to their senses.

Both Chalamet and Carell give fine performances, Chalamet, for one so young, fully immerses himself into his volatile personality, swinging from desperate remorse, to vacant violence stopping at nothing, including breaking into his Father’s house simply to fund his next hit. Carell, no stranger to the more sombre role (see his recent role in Welcome to Marwen), is less than brilliant, whilst still a great performance there is a lacking of connectivity to his struggles leaving no room with sympathy.

The basis of the plot is cleverly written but repetitiveness leaves a jumble of short-lived highs equalling in a failure to connect fully grasp any empathy.

Beautiful Boy is out in cinemas January 18.