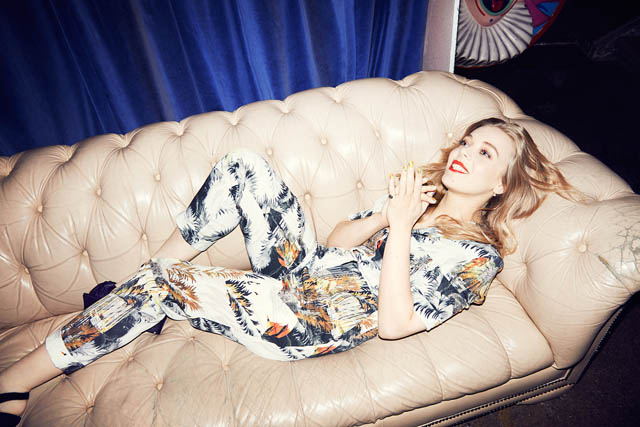 Since first gracing our screens on the very first series of ‘The Voice UK’ Becky Hill has gone from strength to strength. The first contestant from the show to land a No.1 in the charts with Gecko – Overdrive and now shortlisted for MTV’s Brand New 2015 with Emporio Armani Diamonds, we have a sneaky feeling that this years going to be huge for Becky Hill. Luckily she took some time to catch up with Rosie McGowan and discuss future goals, men and what 3 items she’d take to a desert island!

Hey Becky, how are you?
I’m great thankyou!? How about yourself?

I’m great thanks! So as this is a flavour interview, we’ve gotta kick things off with asking, ‘Whats your flavour?!’
Ooo….Prawn cocktail!
Rosie – (laughs) That’s different!
Becky – What’s yours?
Rosie – Strawberry!?
Becky – (laughs) – I like it

Firstly, congratulations on being shortlisted for MTVs Brand New 2015 with Emporio Armani Diamonds, I’m guessing you’re pretty hyped about that!?
Yes, I am. I’m super excited about that! It’s so nice to have the MTV platform believe in my project so much and to start the new year like, right, I really have to do it and be big this year and to have a major platform behind me saying, yeah you can do it. It’s so humbling to know that other people are on board believing that it can do well as well. So I’m blessed really.

You started out on The Voice and I personally feel you’re the most successful contestant to date that has come out of the show with collaborations with Wilkinson, Gecko (which went to No.1 in the charts) and Rudimental is there anyone you’d really like to collab with this year?
I’d love to do a song with Ella Eyre and Sinead. Like a trio collab, I think that would be really cool! I’d also love to do a song with Kwabs.

Wasn’t he on the MTV Brand New shortlist last year?
Yeah he was, I’d love to work with Kwabs he’s amazing. But I’d love to get the Ella and Sinead collab on this year because I just think it would be really cool. So other than your musical career goals, have you got any other New Years resolutions.?
Breakfast! And I’m already doing really badly at it; I’m not eating breakfast.

It’s kind of hard if you haven’t been, you’ll have to re-­‐train your body and mind to want it in the morning!
I can’t think of anything worse than eating food in the morning! Also I’ve made a new years resolution to stop biting my nails, that’s going really well.
Rosie – (laughs) oh good!
Becky – That’s been the same New Years resolution since I was about six!
Rosie – Oh ok…one year!
Becky – (laughs) Yeah! Works new years resolution is to really start stepping into my own as an artist and really become the artist I want to be…to find that confidence.
Rosie – You got this! Make it your year!
Becky – Yeah! Totally! Ok so I’ve got some quick fire questions! Summer or Winter girl?
I’m a summer girl

Yeah agreed! Rugged man or pretty boy?
Rugged! I like my men looking like men!
Rosie -­ I thought you might say that after you said rugby, normally if people say football they say pretty
Becky – Yeah, pretty boys can’t handle it!
Rosie – Definitely!

And finally, if you had to go and live on a dessert island, what three things would you take?
Oh god! (thinks for a moment)…I’d take a fishing rod, I’d like some tunes and maybe some fire lighters.
Rosie – Yeah that would help! So you can eat, keep warm and rave! That sounds pretty cool to me!
Becky – That’s what I’m saying, that’s what I’m saying!!
Rosie – Well it’s been a pleasure talking to you Becky! Here’s to making 2015 your year!

Vote for Becky in the MTV Brand New 2015 with Emporio Armani Diamonds – mtv.co.uk/brand-­new-­for-­2015/voting