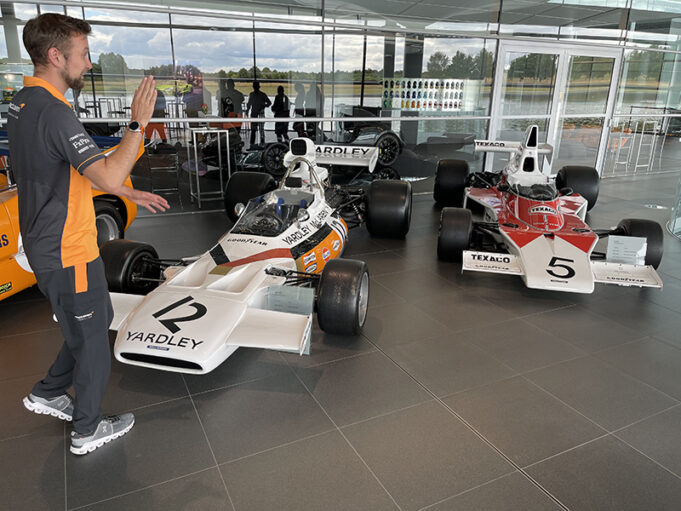 In February this year, Gopuff – a leader in instant delivery – was announced as the Official Instant Delivery Partner of McLaren’s Formula 1 Team.

The multi-year agreement comes as Gopuff continues its rapid global expansion and brings together one of the fastest in delivery with one of the most successful teams in motorsport.

The partnership follows a string of successes for Gopuff, which expanded across key markets in the U.S. and launched in Europe late last year—the first move outside of its native U.S.—and is now available in France, as well as more than 20 United Kingdom cities, with more on the horizon.

Flavourmag went behind the scenes courtesy of Gopuff at the Silverstone F1 Grand Prix with McLaren in mission control. We were given exclusive access to McLaren Mission Control Room’s viewing Gallery on Race Day which is the first time this has EVER taken place.

Before the start of the race, we were given a tour of the McLaren Technology Centre called MTC for short. During the tour we got exclusive access to the McLaren Production Centre known as MPC, this is where they hand produce all of the McLaren Automotive Fleet that is made up of three categories GT models (sport), Supercar models and the ultimate series models, also within the MPC there is a Division called McLaren Special Operations (MSO) all under the same building and this is where all the special work happens, MSO undertakes special vehicle commissions and customisations to the cars that are ordered to suit the customers needs adding unique luxury finishes to the cars.

After the tour of the MPC, we were taken to the awesome 174-metre trophy cabinet, where McLaren Group has the most Motor racing trophies. In total a sum of over 600 trophies across all different series’, where we were able to witness two very special trophies, the first was the Coupe de SM Leopold III first awarded to McLaren in June 1968 it has now become a part of McLaren’s history, held aloft by Bruce McLaren himself after claiming his very first Grand Prix victory on one of the world’s most difficult and dangerous circuits: the 8.76-mile Spa Francorchamps. The Coupe de SM Leopold III has also been held by McLaren for the last four years.

Then came the most important trophy of all… Bruce McLarens’ first-ever race win driving a 1929 Austin 7 Ulster. Bruce’s father Les McLaren suffered from gallstone and Bruce being only 15 years old at the time convinced his father to let him race in his place. This was his first-ever trophy and the start of his career.

Now after an insane race start which saw the race red-flagged after the first turning due to a crash which saw three cars retire from the race, we then gained access to mission control which can only be described as something out of NASA. This was exclusive access to Mission Control Viewing Gallery during the race to witness the team strategy in action.

The layout of the room was a wall of monitors giving you complete access to see the TV pod camera view of every race car on the track, plus race info and a live feed from Sky Sports F1.

There were rows of desks, four in total, the front row was the aerodynamic team, the second row was the engine management team, the third row was the tyre management team and the fourth row was McLaren’s strategists. They were all watching around 300 sensors relaying information about the car in real-time and working as a team to plan the best race strategy for Lando Norris and Daniel Ricciardo alongside their simulators.

As an F1 fan, this was an experience of a lifetime. Just seeing how much work goes into these race cars over the three-day period was insane. When watching F1 on the telly, you can easily dis-regard what it takes to produce a legendary racing team, and I now have a newfound love for behind the scenes, thanks to Gopuff and McLaren.