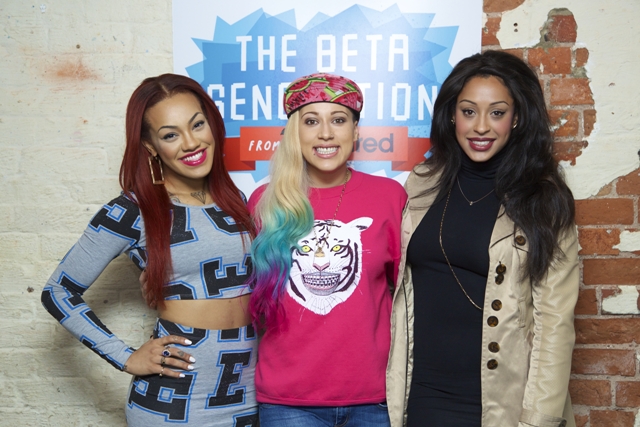 Musical stars Misha B and Stooshe were just a few of the celebrities attending vInspired’s launch campaign to help the Beta Generation at the Book Club on Monday (28th Jan).

The star-studded event also doubled as a charity workshop to support young people with entrepreneurial aspirations. Among the charitable supporters were Olympic boxer Luke Campbell, along with TV presenters Cherry Healey and Will Best.

Research currently shows that the economic climate has created a generation of young people determined to shape their own future. They are collectively known as the Beta Generation, and if you’re aged between 16 and 21 you’re included.

The leading youth charity vInspired identified entrepreneurs of the Beta Generation, who are characterised as risk-takers willing to take responsibility for their own future with 81 % of 16 – 21 year olds saying they will not sit back and wait for things to happen to them.

“I’m fed up hearing nothing but doom and gloom about our young people – lazy, unskilled, selfish, unmotivated and with no hope. I must be living in a parallel universe! This is not what we see at vInspired. As the youth unemployment rates have shown little sign of improvement, we have been heartened by the positivity, energy and refusal to ‘lie down and be done to’ of the young people we meet,” says Terry Ryall, vInspired’s Chief Executive.

The backdrop of the current economic climate and developments in technology as a networking, marketing and learning tool, combined with the key neurological characteristics of this age group, are factors identified by vInspired to have led to the rise of the Beta Generation. See below the statistics in full:

Background of the Beta Generation

Characteristics of the Beta Generation

Using technological developments to their advantage

A generation of social entrepreneurs

The vInspired Cashpoint: £500 grants for young people’s own community projects. They try out their ideas and build their confidence and skills for entrepreneurship

The vInspired Igniter: First crowdfunding platform for young social activists’ community projects. Young people with great ideas use their energy and passion to raise funds themselves

Team v: National network of future community leaders. They tackle social issues in their own ways – leading their own teams, managing their own projects and tying out new ideas

vinspired.com: connecting young people to volunteering opportunities in their area of interest