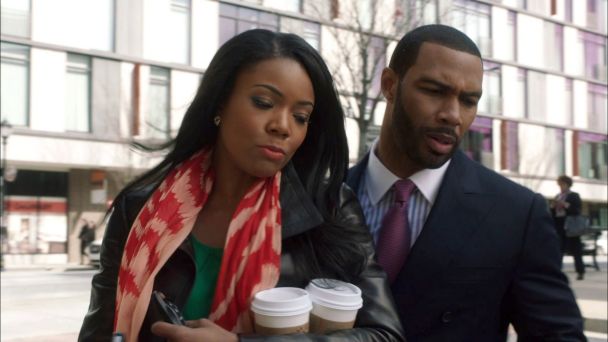 Love is in the air, everywhere we look around but there’s always something a little more devious lurking in the shadows if we take the time to look a bit closer.

‘Being Mary Jane‘ stars American actress Gabriella Union who is best known for her roles in ‘Bad Boys 2,’ ‘Bring It On,’ and music video’s for LL Cool J in ‘Paradise’ & Busta Rhymes for ‘Love my chick.’ The show follows her character Mary Jane as she juggles her quest for love, hosting her popular yet controversial television show and playing mum to her family… believe that this is just the tip of the iceberg. First and foremost the opening scene made me laugh because I could whole heartedly relate, in this scene Mary Jane is multi- tasking as she eats her breakfast whilst lunging, brushes her teeth whilst doing leg stretches and squats as she reads the newspaper. So often it has been said that us woman know how to multi task and that there are never enough hours in the day, so could this be the reason that such an independent, successful and beautiful woman is still on the shelf? Does Mary Jane give herself so freely to others, wishing to please them that she must squeeze in the necessary and everyday tasks? Maybe she should make more time for love!

Awoken to the truth that she has been playing the part of Andre’s mistress she vows to never go back there but a spanner is thrown in the works when Andre reveals he had planned to tell her of his other life (a wife and children) and had hoped she would accept his marriage proposal. Most girl’s dream of that special day but Mary Jane isn’t sure if that’s the path for her or just the path that has been etched into hers. It is apparent that she is in love but the events unfolding around this relationship is one for Oprah, Ricky Lake and Maury to stick their teeth into; drama is something that sticks to Mary like a shadow.

Later that evening we are given a glimpse of one of her girlie nights in and we are fed images of debauchery, lies and guilt as the ladies all in different relationship statuses reveal their dirty little secrets. Light hearted tales soon get tense for viewers as her friend and co- worker Nicelle describes all the perks of being the other woman in her current relationship: the constant flattery, the gifts and the passion, she thinks of herself as a modern day geisha but she doesn’t see the destruction that Mary Jane is now experiencing as the other woman.

“The woman who catches a man’s eye earns a purse. The woman that captures his heart, earns his world.” -Chris Brew-

Her guilt is made worse when she dines one evening with her father, reeling from her sixth sense that a friend of her parents is throwing some mad signals that she wants a piece of Mary Jane’s father, her senses are later heightened when only the next day Catherine pops round Mary’s parents house when it is undoubtedly not the time and place as her mother bravely suffers a serious illness.

Could Mary Jane’s singleton lifestyle be down to the fact she is surrounded by hyena like energy’s? It could just be the fact that she doesn’t have the time with such a manic work life or could it be that men are intimidated by her prowess?

I read a quote the other day that stuck with me, it said ‘One day someone will walk into your life and make you realise why it never worked out with any one else,’ maybe this can be said for Mary Jane. Some people meet their dream partners fresh from college, some meet their true love through work, then some people give their all to other’s both sacrificing but saving themselves for that person that will one day take their breath away.

Being Mary Jane is now BET UK every Monday at 10pm. To keep up to-to-date with BET follow @BET_Intl