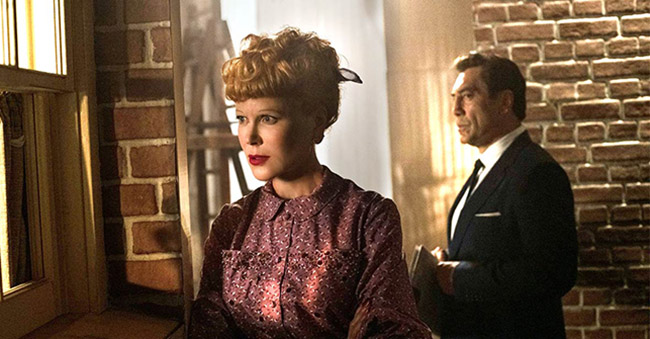 Writer/Director Aaron Sorkin’s love for a real-life story with his liberal twist gets the Hollywood treatment in his latest focusing on the American comedic 1950’s comic Lucille Ball (Nicole Kidman). A behind the scenes look at one week in the starlet’s life, when tales of her philandering husband, Desi Arnaz (Javier Bardem) and her links to communism threaten her whole career.

Unlike Sorkin, he takes a moderately flat approach to retelling this slightly embellished story of many moving parts. The main focus lays on how to convince a very patriotic American audience that the story behind Lucy being a communist simply isn’t true. “We’ll simply tell them you checked the wrong box” states Arnez on numerous occasions, very fitting to the times when women were regarded as nothing better than an uneducated housewives.

Kidman takes on the task of playing Lucy with a serious and stilted performance. As Lucy mentally unravels, fighting with the writers of her hit show I Love Lucy, she undermines their efforts, nitpicking at every little detail over one particular episode. We see Lucy, rightfully, being the creative driving force behind every little detail of what made such iconic moments, such as the grape stomping scene, a home run – all this just to deter from what’s on her mind most, the story of Desi cheating on her.

Filled with flashbacks of how Lucy and Desi met, courted and Lucy’s wish to become part of her own family, move out of the B-List of actress all the while wanting Desi to feel like he hasn’t lost his manhood to play second fiddle to a woman. Passionate fighting between the pair and the married couple constantly battling for their liberal views with the studio execs – all made up of middle-aged white men who are horrified at the very suggestion that they have a pregnant woman on TV – makes for a pretty exhausting and mundane yet still rather compelling story.

Sorkin frames the story quite nicely with a documentary setting, getting three older actors to play the role of the writers, retelling the story of that week. The tragedy lays in not just Kidman’s unconvincing physicality of a Hollywood icon but the fact, despite her efforts, Lucy failed to save her marriage despite the mundane off-kilter of the telling of her story, we still Love Lucy.