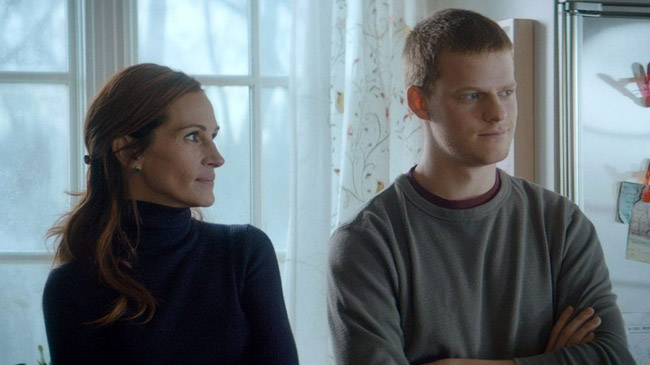 Gritty with an intimate reality, Ben is Back hits a little harder than other recent addiction stories but fails to give us the ultimate high.

Addiction has become the new trend in the Hollywood Hills this year – no, not in the obvious way you might think – with January’s offering of the Timothee Chalamet lead Beautiful Boy, its quickly being followed up by a grittier and less stylised story with Peter Hedges Ben is Back. An addiction story that focuses on the details rather than its subject own vanity project.

With all its promise of reality however, the plot is exactly what you would expect and doesn’t give much wriggle room for any originality. Having left rehab earlier than his parents or sponsor would have wanted, Ben (Lucas Hedges) returns home for Christmas pleasing his sceptical but doting mother Holly (Julia Roberts). His return upsets the apple cart in the family home and this is where the details paint the picture of Ben’s past drug-fuelled misdemeanours rather than the constant barrage of the flashback. There is even a scene in which Robert’s visit’s Ben’s childhood doctor, now suffering from dementia Holly unleashes a tirade of blame for Ben’s addiction after constantly upping his doses of painkillers at the tender age of 14.

Holly can’t quite trust her son yet, emptying out the drugs cabinet, removing any temptation out of his way, whilst his sister Ivy (Kathryn Newton) and step Dad Neal (Courtney B. Vance) treat Ben’s new-found sobriety with sceptical disdain. The only ones pleased to see him are his half-siblings who are too young to realise the pain he has caused in his past. It’s the past that comes back to haunt Ben when his old dealer wants to recruit him back into the fold to pay off past debts.

With an addict, there is always that fear of the slightest little push sending them over the edge to fall straight back into their old ways. Hedges Ben nails the expected anticipation at every turn, questioning whether he is really trying to stay clean or is this all a rouge. None more so than when the family dog goes missing and Ben takes the responsibility of trying to track down the beloved family pet lulling him back into the world which caused all the past mistrust and pain.

Robert’s as Holly is the typical concerned mother, in an effortless performance she draws on parental anguish, after all, love is the fundamental key here and no matter what her son has done in the past she will do anything to keep her son alive even if that means throwing herself into the pit of danger.

Peter Hedges writing of the story has a personal connection; it doesn’t patronize or feel as self-absorbed as Beautiful Boy. It’s steeped in reality with its grit and determined performances and for once there is no glitz or art-filled beauty in a subject that sinks into dark despair, but for all his commendable efforts Hedges doesn’t quite hit those satisfying notes, less is more in this case but an injection of a little imagination could have given this the perfect high.

Ben Is Back is out in cinemas March 15th.