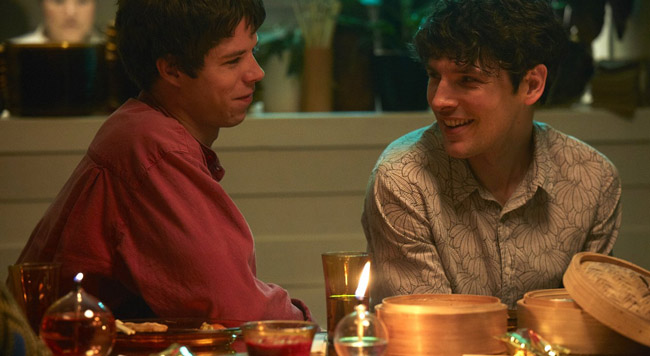 Through all its Shoreditch hipster pretention there is a fine balancing act of witty inelegance.

For those of us who can remember as far back as 2000, Simon Amstell presenting on Popworld was a staple diet for any youth. Amstell, after years on the circuit, is finally making his feature debut in which he brings his trademark awkwardness and bumbling stammer into a film heavily inspired from his own life’s highs and lows from relationships to an aspiring film career.

Set amongst the throws of hipster London, Colin Morgan plays Benjamin, – who has a cunning resemblance to Amstell – a rising filmmaker. Having hit gold with his first feature numerous years previous the pressure is on for his second to be just as big a hit. Full of self-doubt and a less than a supportive publicist, the days leading up to the films festival premiere are filled with anxiety and the need for validation.

Benjamin finds that validation in the form of a relationship with Noah (Phénix Brossard), a French student and frontman of a band. At first just a distraction from the car crash his career is about to take, Colin ends up falling for Noah and learns to accept that putting someone else before his own need for acceptance could actually be the answer to his own happiness too.

For all its light-hearted charm and endlessly evoking angst, the dialogue, from start to finish, has the same awkwardness as Benjamin does in first meeting Noah; so taken by its beauty, constantly fluffing its words only results in an age before actually getting to its point. Endearing to some maybe, but it teeters on the edge of annoyance before toppling over into wanting to grab it by the shoulders and telling it to ‘man up’.

Amstell does vie away from the self-indulgence but never for too long. Subplots include Benjamin being flanked by his best friend and writing partner Stephen (Joel Fry) who has his own awkwardness and obsession issues. Benjamin’s circle becomes an incestuous merry-go-round as Stephen has a dalliance with Ben’s publicist, whose boyfriend starred in Ben’s new film and by chance also likes to experiment with his own sexuality, but surprisingly it never quit spins out of control and keeps the comedy relevant.

It’s all very Shoreditch hipster pretention on the surface; it was just missing a few well-groomed beards to give it that authenticity. Amstell embarks on a balancing act of witty inelegance before arriving, eventually, at a charismatic finale.

Benjamin is out in cinemas March 15th.