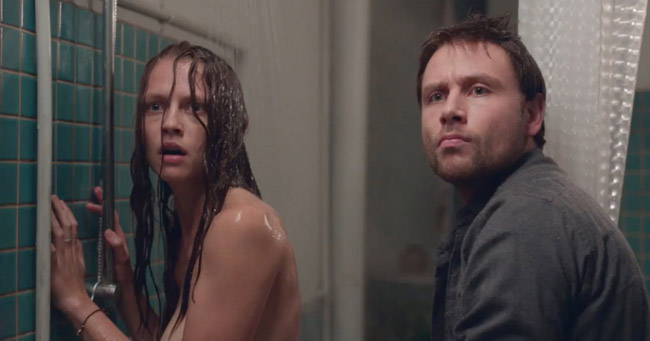 Holiday romances aren’t all they’re cracked up to be in Berlin Syndrome.

If you were lucky enough to see last year’s German single-take sensation, Victoria, the early scenes of Cate Shortland’s Berlin Syndrome will feel decidedly familiar.  A female tourist from another country, filled with wonderment and excitement.  The hint of vulnerability that goes with a woman travelling alone.  And the holiday romance with bigger implications.  It’s at that point that the similarities end, but not in a bad way.  It’s just that Berlin Syndrome has a different premise.

Tourist Clare (Teresa Palmer) has arrived in Berlin and finds herself chatting to Andi (Max Riemelt): his English is above average because he teaches the subject.  Instead of moving on as she planned, she tracks him down and their attraction turns to a night of passion.  But after he leaves for work the following morning, she finds she can’t leave his apartment and there are certain other things that most definitely aren’t right.

You have to hand it to Andi – he’s planned everything to perfection.  He picks a tourist, somebody who won’t be missed for a while, at the very least.  And he takes her captive just before the start of the Christmas break when the country partially closes down so, yet again, nobody will miss her.  He’s clearly done it before – the heavy duty lock on the front door to his flat and the reinforced windows are giveaways, as is his love of taking Polaroids.  You keep wondering when Clare is going to attack or even kill him……..

Teresa Palmer has moved from playing the wholesome romantic interest in Hacksaw Ridge to a romantic interest of a very different hue – and does it seamlessly.  At the outset, she seems reasonably resourceful and confident but, finding herself trapped in the apartment, her confidence is severely undermined.  She’s terrified yet dependent on her captor.  Berlin Syndrome is doing more than playing around with a pun on its Stockholm cousin: the involvement between kidnapper and captive right from the start and, underlying the victim’s dependency, is an increasingly deeper hatred.

Director Cate Shortland takes us on a suspenseful psychological trip, one that constantly upends our expectations: when we expect to be taken in one direction, the film goes in another, often darker, one.  So there are times when our discomfort and Clare’s start to intermingle, even though she’s in a far worse place.  You do have to suspend your disbelief occasionally – the location of Andi’s apartment is just a little too tailor-made for a kidnapper – but the essential storyline grabs hold of you so firmly that you’re happy to put that to one side.  What lets the film down, however, is the ending, which is weaker than the rest of the film deserves.

If there’s one thing Berlin Syndrome isn’t, it’s a date movie – first or otherwise!  Go with your best mate: you’ll feel a whole lot safer and probably won’t find yourself looking at them in a different way when you come out.