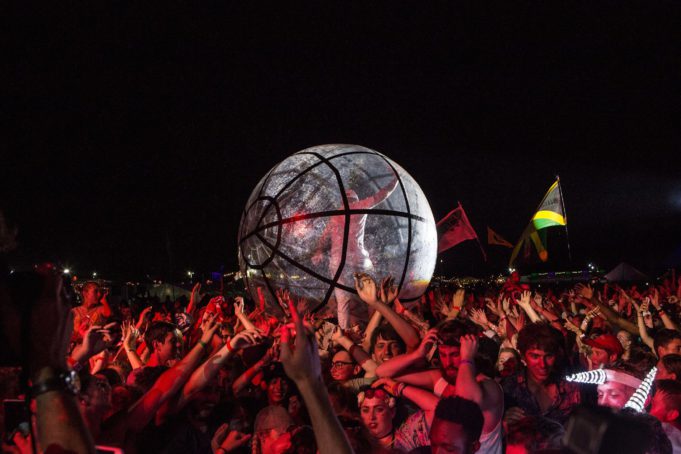 No doubt one of my favourites and finishing the summer of festivals and feastivals on a muddy high, we present to you Bestival 2016.

This year felt a little bit different for me, perhaps it was the water damaged phone or the distinctive lack of a lanyard with set times but somehow we pulled it off. Friday was all about getting to know our surroundings as we promised to partake in yoga (we’ll blame the rain for missing out on this but the tent was always full and echoing peaceful vibes.) Fortunately there was a physical activity that we could get behind when the rain did one and we were suitably dressed for it, queue the ladies from Reggae Aerobics who got people ready for Sean Paul on Sunday evening. They amassed quite the crowd over on the Carnivale Ship as they sported Jamaican flag leggings and taught moves whilst likening them to our favourite caribbean dishes, they truly were the epitome of Carnivale. The Spaceport, usually dubbed the port was invaded by two gigantic astronauts as we went bonkers to a set from My Nu Leng and experienced drag queens, semi naked bears, wigs, chaps and live vocals from Living Joy, all whilst Sink The Pink spun the finest club classics of the nineties and noughties. Talking of the nineties, we discovered Thrill Collins in the Caravanserai, who established that garage music can work when set to the same beat, albeit with a folky twist. It was fun to hazard a guess at what song would make an appearance next, with me successfully guessing Daniel Bedingfield, So Solid Crew and Artful Dodger would crop up. Next the skiffle-pop trio mixed hip hop, soft hop, Nirvana and Bewitched into a beautiful production before finishing with a dirty dancing or Black Eyed Peas rendition of ‘Time Of My Life.’ They were a highlight, managing to produce a hell of a lot of crowd participation and receiving a celebratory encore! Another highlight whilst surrounded by caravans and American trash hillbillies was the dance off which featured a kinky boot, hotpant clad German man and a surprise outbreak from the New York Brass Band, a tartan wearing band ensemble who entertained with trumpets, saxophones and all those other brass instruments you just love but aren’t quite sure what they’re called and how you’d have the energy to blow them along to Pharell William’s ‘Happy.’ They made a retreat from the rain even more appreciated. There were warm additions including Bulmers Colour stage, if you fancied being immersed in bright paint, a small change from the glitter that still presents itself across my body and my hair. The Feast Collective knocked my senses sideways as I experienced a posh Shrimpy burger with skin on chips, a buttermilk chicken burger at Butchies and a bestiv-ale to wash it down nicely. Temple Island, one of the joints for hard hitting beats and dj feats, emerged bigger and better as 2015 had crowds flocking but struggling to catch a glimpse of artists. The space was more open and gave dj’s a better view of their adoring attendees. The world’s biggest bouncy castle could be seen across the land, alongside old rookie the Love-Bot. The Commune offered childish antics, graffiti and unwinding activities, then when it got cold and dark, lit up Robin Hill Country Park like a beacon.

We sampled maple bacon popcorn at the Co-operative whilst others signed up to have dinner cooked in front of them in a well orchestrated food fracas. Next door was the Wedding Disco, another inflatable for the festival were brides and priest ran a riot and wedding guests really got into the drunk wedding spirit. Making friends with first timers, experienced pros, drunk dads and disapproving children, Bestival quite literally could keep anyone occupied and gleeful. My glee came in the shapes of Major Lazer who brought out MO to lean on her amazing vocal talents, as canons erupted and dancers whipped crowds into a dancehall frenzy with a soundtrack of ‘Light It Up,’ ‘Watch Out For This’ and ‘Get Free.’ Sean Paul provided fans with a global mash up of past and present hits, bringing out Stylo G in the process and encouraging some serious arm bouncing as cameramen zoomed onto his risque bodysuit skimming dancers. Sean-a Paul as he goes, or Juan Paul as one reveller put it, sent me on a dancehall and pop extravaganza as we worked what mama gave us to ‘Still In Love,’ ‘Cheap Thrills,’ ‘Make My Love Go,’ ‘Trumpets’ and ‘Love 2 Luv,’ just proving the Jamaican is a lover, not a fighter. Also gracing the main stage was Years & Years who fully worked the futuristic look whilst filling the airwaves with some much loved electropop as contemporary dance eluded the stage. Ghostpoet got rocky with his distinctive rap, Krept & Konan divided and conquered the crowds encouraging a multiple of mosh pits, rallying us to cuss prior festivals they’d attended over the summer, as well as the feds, in a lead up to everyone’s favourite ‘Freak Of The Week.’ Nandos kept us fed and entertained with sets from ‘BLUKU BLUKU’ Newham Generals, Maribou State, Sister and of course my most stalked act Kurupt FM, who gathered an army of moshers including spider man and a guy who lathered himself in mud and smashed out some press-ups in the process. I joined Kurupt FM again for their momentous Champagne Steam Rooms, where DJ Steves spun the best in grime and garage, as bollywood dancers enchanted the stage, I was lucky enough to experience the finesse of a People Just Do Nothing event, receiving a flute of Champage (it could have been lambrini but bubbly is bubbly) before the champagne showers began and I was briefly blinded. Also taking to the exotic tent was Norman Jay, Toddla T, DJ Zinc, Goldie and David ‘Ram Jam’ Rodigan. A festival that is always abuzz, the day and night parades illuminated Strawberry Fields as drums rang out, where llama’s and owls roamed under watchful eyes and giddy onlookers. The fairground came to town with a helter skelter and ferris wheel that must have graced many a bottom. The enchanted forest was full of live performance, disco sheds, theatre and films, as well as being our refuge on a rainy Saturday morning, which brought about it a beautiful rainforest sensation. Come rain or shine, festival goers had much to do but were indebted to the tented arena’s such as The Big Top where fans welcomed the mesmerizing Katy B who always brings the energy and that raver vibe. There was the effortlessly cool Mura Musa who performed one of my summer jams ‘What If I go?’ and I made a new discovery in the form of Billie Marten who projected hauntingly beautiful vocals. Back on the main stage was the popular and wickedly interactive set from the WSTRN lads, soul warming from another legend in the making Mr Damian Marley and some proper rock from The Cure singing one of their classics ‘Friday I’m In Love.’ A proper mash up of acts, revellers and experiences, we finished our Bestival fantasy with a purple hue over the Strawberry Fields, where many stopped in their tracks to welcome ‘When Doves Cry’ and ‘Purple Rain.’ Sparks flew across the night sky in a homage to the late musical legend Prince, and just like that Flavour Mag bid Bestival an esteemed goodbye.