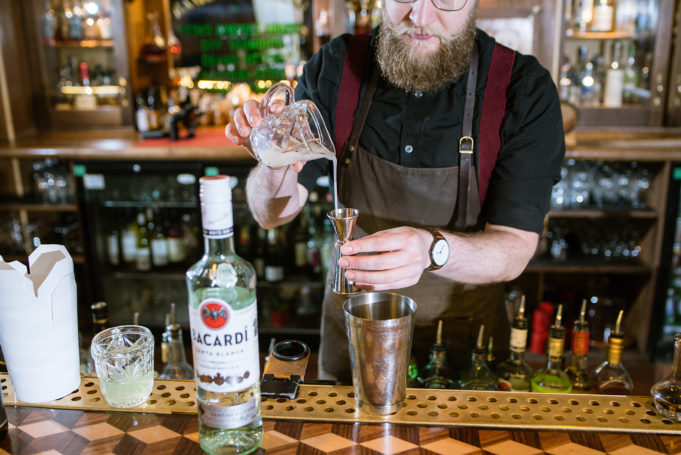 Just my luck that upon my visit, Tales of the Cocktail the world’s leading cocktail festival was in town. A huge success in the States, the festival had been touring the Americas from Vancouver to New Mexico and had now chosen the Scottish capital as the first European city to host the festival.

Featured bars and drinks partners for Tales of the Cocktail included:

Here is a count down of our top 5 best bars to visit next time you’re in Edinburgh (in no particular order): Why we like it: Hidden away on Queen Street, Panda and Sons fuses the classic prohibition style Speakeasy and vintage barbershop (that’s right, barbershop). What’s better than getting a fresh barnet and then downing a few dozen cocktails? *During Tales of the Cocktail on Tour, Panda and Son’s hosted ‘Lord’s of the Playlist’, an epic sound clash party hosted by BACARDI and London’s ‘The Cocktail Trading Co. owners Olly Brading and Elliot Ball4 Why we like it: Those able to spot its miniscule sign and discreet entrance will be enchanted by the intimate and elegant interior of Bramble Bar. The cocktail list is a mix of forgotten classics and some original drinks invented by bartenders (past and present). The bar also plays a good mix of music. * During Tales of the Cocktail on Tour, Bramble hosted ‘Sippin on Gin and Juice’ a night filled with classic hip hop and cocktails brought to you by Thierry Malkian and Christoph Sichahn from Paris’s Le Calber and Bombay Sapphire Why we like it: Opened in 2008 the idea behind The Bon Vivant was to create an environment that was similar to those found on the continent; where dining is often informal and casual yet of a very high standard. Best Cocktail: Give the ‘Well Plaid’ a whirl, although it is designed for two to share, this beverage features Dewar’s 12 Year Old Whisky, Bramble Shrub, Hog Weed Seed Tincture and is served hot.

* During Tales of the Cocktail on Tour, The Bon Vivant hosted ‘The Connoisseur’s Cocktail Club’ with The Savoy Hotel’s Erik Lorincz and Declan McGurk and Martini Riserva Speciale Why we like it: The bar holds an eclectic collection of Scottish and world whiskies. Their multi award winning bartenders also serve inventive seasonal cocktails, a considered wine list and selected craft beers. *During Tales of the Cocktail on Tour, the Devil’s Advocate played host to ‘Celtic Connections’, a celebration of all things Scottish alongside Dewar’s Whisky and Jack McGarry and Sean Muldoon who own New York City’s prominent bar/Irish pub The Dead Rabbit Grocery and Grog

The Voyage of Buck Why we like it: Following an extensive refurbishment, The Voyage of Buck was reopened last September. Although parts of the original pub have been kept, you wouldn’t recognise the place had you been before. There’s an early 20th-century feel with Edwardian and Art Deco styling, with the bar the main attraction as it should be. The cocktails here alone are one of the reasons you need to visit this venue. *During Tales of the Cocktail on Tour, The Voyage of Buck hosted ‘Pickling and Preservation- Scandi style in Scotland’. Led by award winning Swedish bartender Jimmy Hulth from Tjoget Bar in Stockholm, the event brought together a Scottish and Scandinavian inspired menu of Patron cocktails

There you go, our count-down of the 5 best bars to visit next time you’re in Edinburgh, so why not jump on a BA flight to Edinburgh or easyjet and start living the cocktail lifestyle.