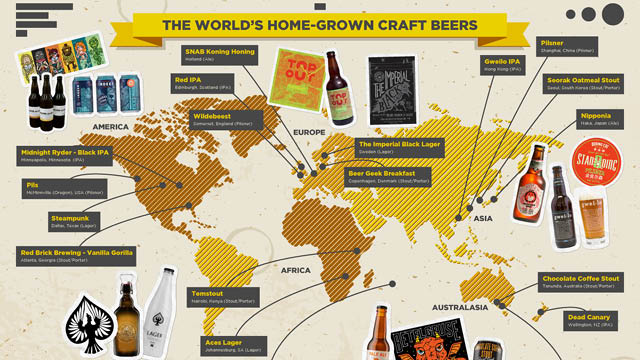 Love home grown craft beer? We do! And if you do too, then you’ll love this special feature on the Best Home-Grown Craft Beers Around the World.

Dealchecker.co.uk have put together this amazing illustrated feature on the Best Home-Grown Craft Beers Around the World. From Europe to America, Africa to Asia, the feature gives you a good overview of craft beers.

There’s a vast increase of breweries popping up all over the world. Some of us are simply fed up of ye-old-beer-in-a-can and want something that feels local, tastes fresh & unique and isn’t produced from a corporate factory.

Doesn’t it feel better drinking craft beer locally produced from the town you are visiting? Doesn’t it feel nice knowing you are supporting local business’ and microbreweries? Isn’t it great to try locally sourced products with your friends while having an evening out? Of course it is.

Here’s a snippet from the Home-Grown Craft Beer Around the World feature.

A break-off initiative from one of Sweden’s leading breweries,  Spendrups, Brutal Brewing is run on a mainly voluntary basis by a team of dedicated beer lovers. The Imperial Black Lager is created using darker malts than traditional Guinness, and a hearty swig will release tones of roasted coffee and even fresh mint.

A proud producer of ‘alternative beers’, SNAB draws inspiration from forgotten Dutch beverages to produce fresh new flavours. Koning Honing is distinguished by its sweet flavour, courtesy of Canadian clover honey and Sicilian orange blossom, which is said to evoke the crisp air that rolls across Purmerend’s polders.

With a philosophy and branding inspired by its majestic, mountainous surroundings, Top Out Brewery’s beers are drinkable forms of the dramatic scenery just outside of Edinburgh. South Face Red uses New Zealand hops to produce a tropical fruit taste, but stays true to its Scottish roots with its label, which illustrates Bidean nam Bian summit overlooking Glencoe.

Nestled within Somerset’s undulating scenery, Wild Beer Company focus on producing products inspired by rugged, English countryside. Wildebeest is a real treat for those with a sweet tooth – an ‘espresso chocolate vanilla stout’, which is said to be best enjoyed from a comfy armchair in front of a roaring fire.

Georgia’s oldest operating craft brewery, the original incarnation of Red Brick Brewing was founded by a former Guinness executive. With its fragrant Madagascan Bourbon vanilla beans and six different malts, the Vanilla Gorilla Imperial Porter is great for pairing with sweet treats, such as a succulent Georgia cherry pie.

This unassuming building in downtown Dallas houses a vibrant taproom and one of the best brew pubs in North America, offering creatively designed beers and regular live music. Steampunk is an all-American steam lager, designed to release its flavours in warmer temperatures – what better tipple to sip on in the beating Texas sun?

Equally intent on cultivating excellent cold beer as ‘warm fuzzy feelings’, this Minnesota taproom and brewery is a staple of its local community, nestled between disused rail tracks. A beloved regular of the brewery’s collection, Midnight Ryder IPA fuses hints of chocolate and caramel with the piney, forest aromas of its north Minnesota home.

Currently tied as the number one Pilsner in the world on ratemybeer.com, Pils is a malty, American take on traditional Czech flavours. The brewery that Pils calls home started life as the home-brewing project of an investment banker, and has since matured into one of Oregon’s finest craft beer outlets.

Want to see more? You can read the full article here