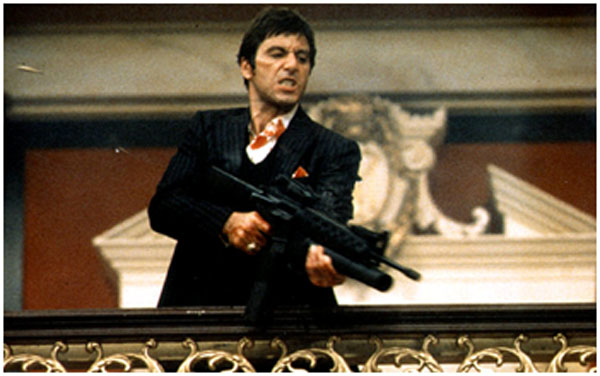 To celebrate the release of Pixels, which is out to own on Blu-ray and DVD now, we take a look at some of the most iconic films of the 80s.

Based on well-known retro gaming characters, Pixels follows a team of arcade gamers who must defeat and save the earth from aliens using the likes PAC-MAN™, Donkey Kong™, Galaga™, Centipede® and Space Invaders™ as models for their various assaults. The following list it’s a tribute to some of the best 80s films that continue to be influential in the world of classic cinema. The second film of the franchise is probably the best Star Wars film as it has everything; action, drama, love and intrigue.

Most iconic moment: Certainly the most famous scene; ‘Luke, I’m your father’. Raiders of the Lost Ark epitomised the adventure genre and is now a beloved classic.

Most iconic moment: The ‘Why did it have to be snakes’ scene-Indiana Jones really hates snakes! One of the best sci-fi film of all time, Blade Runner is an epic dystopian noir which is still having a cult following.

Most iconic moment: The final scene This must-see gangster film has set the standards for criminal films and real life criminals; piles of money, powdered noses and extravaganza lifestyle.

Most iconic moment: Obviously the ‘say hello to my little friend’ scene! This sci-fi thriller has it everything; compelling story, action, humour and cyborgs. Most iconic moment: The ‘he slimed me’ scene. A true classic 80s film and a definition a time-travel films.

Most iconic moment: Obviously the ‘we don’t need roads scene’! The story of ‘the brain, the athlete, the basket case, the princess and the criminal’ encapsulates beautifully teen’ fears and dreams.

Most iconic moment: ‘The essay’: “Dear Mr. Vernon, we accept the fact that we had to sacrifice a whole Saturday in detention for whatever it was we did wrong. What we did *was* wrong. But we think you’re crazy to make an essay telling you who we think we are. You see us as you want to see us… In the simplest terms, in the most convenient definitions. But what we found out is that each one of us is a brain and an athlete and a basket case…a princess… and a criminal. Does that answer your question? Sincerely yours, the Breakfast Club.” Another Hughes’ film, this ode to teen spirit is still one of the most euphoric films ever.

Most iconic moment: The ‘Twist and Shout’ parade scene This action-drama about Navy fighters has some legendary aerial scenes that are still thrilling to watch.

Most iconic moment: The final dogfight

Pixels is available to own on DVD and Blu-ray NOW!