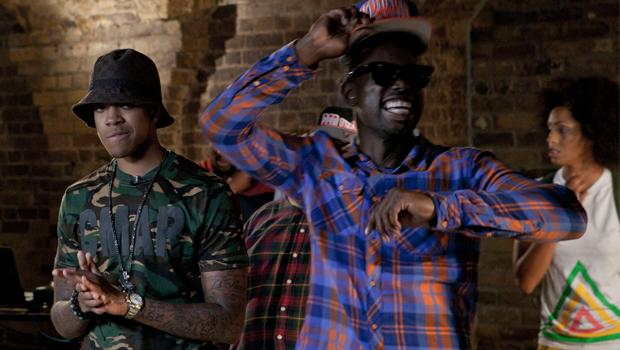 The BET Hip Hop Awards 2011 are coming to our screens this Saturday, October 15 at 8pm. British music has made a big impact in America and across the globe over the past two years, with artists such as Tinie Tempah breaking records and pushing our music forward with a powerful force.

We’ve heard American artists being heavily influenced by dubstep and bass beats that sound like they have come straight from the UK; from Jay Z and Kanye’s ‘Who Gon Stop Me’ to J Cole’s ‘Nice Watch’. Since the UK music scene is doing it so big, it was only right that the BET Hip Hop Awards included some of the biggest names in the game to star in their own UK cypher. I was one of the lucky ones invited to attend the filming and speak to artists about being involved in the epic cypher.

As I arrived at St Catherine’s Dock a security guard seemingly emerged out of nowhere, asking “Are you looking for those rapper guys?” Apprehensively I said yes and he led me into a car park and I followed him to a dinghy door.

As I opened the door and said goodbye to the blazing sunshine, I entered a grand room which was delightfully cool and full of superstars that I had admired since I was a teen. I was a little star struck, to put it modestly.

So, I know ya’ll want to know the line up. In the building was Chipmunk, Wretch 32, Akala, Ghetts, Mz Bratt, Lady Leshurr, Bigz, Gfrsh, Smiler, Roxxxan and Mic Righteous. It was kinda epic.

It was a long day, so artists took time out of filming to get some food and a dose of sunshine.

I had a chat with Mz Bratt as she went for a break, asking her how she felt to be a part of the cypher (something women are rarely included in – Nicki Minaj was the first lady in the US). She was graceful, humble and ever so polite, which was a pleasant surprise after listening to her fiery bars. She said of the cypher: “It’s amazing and I’m so glad to be a part of it. The UK movement is pushing through and the world knows it.” The line up was awesome, but I couldn’t help but wonder were Grime greats such as Dizzee Rascal, Giggs, Tinie Tempah, Tinchy Stryder and Skepta were; I felt they were missing from what would have been a perfect team otherwise. I had definitely expected to see Giggs there, considering he won the Best UK Hip Hop award back in 2008. Maybe they had other commitments, maybe they were not invited; I am yet to know why some important names were lacking from the line up.

Ghetts and I went outside for a spot of sunshine and as soon as the sun rays hit us, he began stripping his shirt off. Apparently I was staring too hard, as he said with a smile: “I never got this when I was skinny!” Once my blushes were held under control, we spoke about the relevance of the artists who had been invited to spit their bars. “I get myself gassed bruv; I KNOW I should be here. And I got massive respect for my peers who are here, and should be here, today.”

After humming ‘Shakespeare’ to myself and looking at Akala in awe for a few seconds more than I should have, he came to say hello and I got the chance to ask him how his day was. He sighed then smiled, saying: “It has been a long day. But I’ve been doing this for a long time and I’m used to the long days. Anyway, it’s all good when you’re working amongst friends.”

Although many artists forgot some lyrics and scenes were filmed over and over (and over), the bars were big and the flows were on point, making me confident that the UK cypher will impress the world and make the UK proud.

The cypher will be premiered during the BET Hip Hop Awards on the show this Saturday 15th October 201  – don’t miss it, but if you can’t wait until then check out the USA Cyphers below


Go to www.bet.com to see the rest