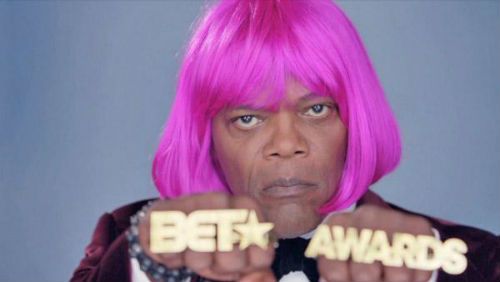 The show kicked off with G.O.O.D music’s Kanye, who was decked in all-white, he was joined by 2 Chainz, Pusha T and eventual Best New Artist winner Big Sean to perform their runaway rap hit “Mercy”. After their performance the camera panned straight to the rapper’s reality star girlfriend Kim Kardashian as she gave him a standing ovation. Moments later, movie director Spike Lee joined the show’s host Samuel L. Jackson as they did a comedic version of Jay-Z and West’s hit song “N***as In Paris,” to laughs.

An emotional highlight of the show came when Cissy Houston paid tribute to her daughter Whitney when she performed ‘Bridge Over Troubled Water’, which left the likes of Beyonce and Melanie Fiona in tears. Singer Mariah Carey opened the tribute with memories of her friend, which was followed by a moving number by Monica. Brandy, heavily influenced by Houston, sang two of the late singer’s hits. Chaka Khan hit the stage with “I’m Every Woman,” which Whitney remade. Gary Houston, Whitney’s brother, also performed.

Many other tributes to deceased greats were also performed on the night including Chante Moore performing a medley of Donna Summer’s hits and Valerie Simpson sang a song in honour of her husband and writing partner Nick Ashford.

Kanye and Jay-Z won the ceremony’s top prize, earning video of the year for “Otis.” They also won best group.

Kanye, who was up for seven awards, was the top nominee. Beyonce was the second with six. She won video director of the year (along with Alan Ferguson) and best female R&B artist and thanked the genre and her female influences.

“I fell in love with music by listening to R&B. It’s the core of who I am,” she said, giving special thanks to Lauryn Hill, Mary J. Blige and “Whitney Houston, my angel.” Usher, D’Angelo, Tyrese, Faith Evans and Joe also performed on the night. Congratulations to the UK’s Wretch 32 who won the award for Best International Act UK.

Here are some of the stars on the red carpet