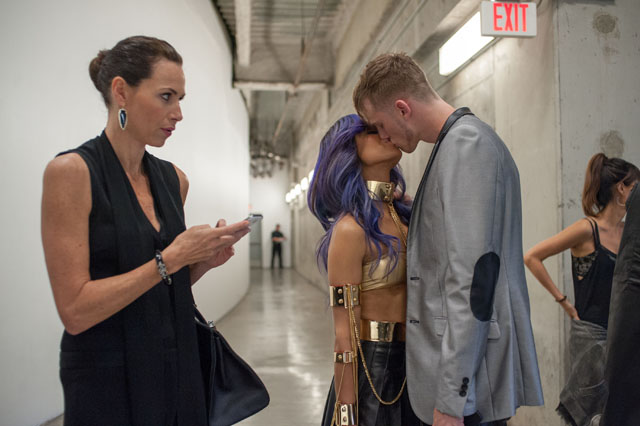 What we hardly ever see is that the music industry isn’t always glitz and glamour, the sacrifices a lot of artists, and especially women, make in order to achieve that superstar status may shock quite a lot of you.

Thankfully, Beyond the Lights opens up the practically unknown pressures our stars go through today in order to gain that fame and pretty healthy bank balances.

The story follows Noni (Gugu Mbatha-Raw), a global music superstar, she’s young, sexy and seems to have everything going for her, but deep down she is deeply unhappy and is close to the edge. On what should be one of the best nights of her life she falls deep into despair, that is until she meets Kaz Nicol (Nate Parker), a young cop (and aspiring politician) assigned to keep guard over her hotel room. Instantly they are drawn to each other like moths to a flame and fall head over heels in love way to fast. Everyone around them tries to discourage the romance and urge them both to concentrate on their careers but ultimately it’s their love for one another that wins and also Kaz’s love that gives Noni the confidence she needs to break free from her industry chains and become the artist she so desperately wants to be.

It’s clear to see when we are first introduced to Noni that the likes of Rhianna may have been a huge inspiration, her whole persona is the sexy bad girl image, from the way she looks and dresses to the way she performs ever so provocatively on stage, but we soon get to see everything about that public image is fake. From the very onset of the film you’re completely drawn in, I put this down to how well the film is shot. One minute you’re immersed in a big and brass moment the next everything quietens down and has a more melodramatic feel which just emphasis the pain and total anguish Noni is going through in her struggle to be who everyone else wants her to be.

What is very important is that it highlights how disgraceful the music industry is in its treatment of their female artists, whether intentional or not you can’t help but think about those female artists that have this sexy image and how they are made to sell their soul for a bit of fame and money no matter how talented they are. We do have to remember though this is also a quaint little love story between a woman on the brink of a total meltdown and the man that comes to her rescue from her despair, that’s my only negative taken from this film. Why does it have to be the female who needs rescuing by this super cute and strong man, I’m sure there is another woman out there who would like to see the story told the other way around.

The storyline is extremely well written and executed by the cast, Minnie Driver as the overbearing pushy mother of Noni can be a bit over the top at times, but the emphasis on how the characters are written and played just aids the audience into feeling engaged with the characters and makes you love or hate them, you’ll find yourself hating the mother for what she is putting her daughter through and not being able to hear her cry for help.

Gugu Mbatha-Raw performance as Noni is extremely convincing, raw and quite heartfelt. She has certainly taken her character and hit the ground running; she almost plays two different people, the fake superstar and the natural down to earth girl with such passion. We also have the extremely, easy on the eye Nate Parker who plays Kaz, Noni’s love interest and Knight in shining armour, who comes across on first glance as a cross between Jamie Foxx and Denzel Washington. He’s smart, intelligent and has the brawn to go with it. This is just emphasised when he takes off his perfectly crisp white vest to bandage Noni’s wounds and we get a glimpse of his chest, the ladies in the audience will swoon, guaranteed! Nate Parker is also a good actor and most definitely one to watch.

Beyond the Lights, even though it has a pretty formulaic storyline, is a surprisingly smart, sensitive and sexy film with a great cast performance making it a highly entertaining watch!

Beyond The Lights is OUT NOW on DVD

Order your copy on DVD HERE

Why not check out our features on Gugu Mbatha-Raw and Minnie Driver to find out where you have seen them before. Just click on their names below.