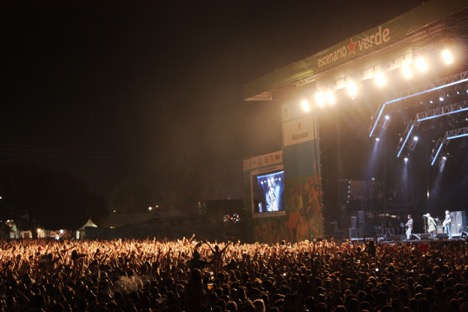 Every year, thousands flock to the biggest music festivals around the world to experience world class music live, and people from all over the world and all walks of life unite in a single experience.

Air Charter Service recently put together a list of some of the world’s biggest music festivals, including their locations, prices and even weather conditions. Below are five of the biggest festivals from the list. The Coachella Valley Music and Arts Festival drew a crowd of 198,000 people in 2015. Having been around since the 1990s, and started by the popular band Pearl Jam, it has established itself as a ‘must-do’ festival. Previous headliners include Calvin Harris and Ellie Goulding. The Glastonbury Festival has been around for 45 years, is the largest open-air music festival to date and includes not only music, but also film. The festival is committed to using sustainable energy and donating profits to local charities. The likes of Coldplay and Muse have previously headlined at the popular festival.

Established in 1994, Sónar is a highly popular electronic music festival held in Barcelona. The Festival is divided into day and night versions, with the day shows highlighting up and coming artists, and the night shows highlighting popular international acts. Last year saw a record of 119,000 tickets sold. Started in 1991, Lollapalooza has grown to around 160,000 attendees each year. The festival, which began in the US has grown in popularity so much that they have opened the festival up to Argentina, Chile, Brazil and Germany. Previous acts have been Florence + The Machine, Metallica and Paul McCartney. As one of the oldest music festivals in the world, the Reading festival draws up to 87,000 people per day. The festival is known for it’s history of bottling unpopular acts off stage, where empty drinks bottles would be thrown at an act the crowd deemed unworthy. Major international acts such as the Red Hot Chili Peppers, The Courteeners and DJ EZ have headlined at the festival.

With so many festivals happening around the world and at different times of the year, you’re spoilt for choice. And If you’re looking to combine your annual holiday with an international music festival experience, we’ve put together a list of the 15 tempting international festival destinations for 2016 for you to browse through.