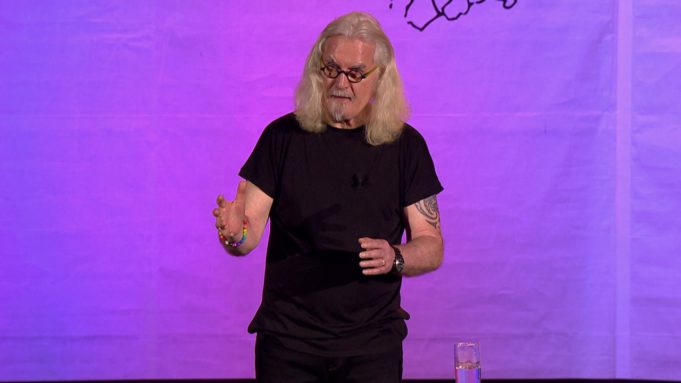 At age 73, famous Scottish comedian Billy Connolly took part in his High Horse Tour, an 11-night stint at the Hammersmith Apollo back in January this year.

The DVD release allows us to become part of the audience at Connolly’s show,laughing alongside the live audience with which it was filmed.

Our first sight of Billy is unexpected. Looking slightly frail, he makes his way to centre stage, all with small steps and miniature movements. His opening line pokes fun at his illness as he says the audience are only cheering him because he’s unwell. Immediately, the elephant in the room not only is acknowledged but pointed toward and laughed at. It breaks the ice and settles the audience in for a Billy Connolly performance like any other, not hindered by his health.

With his full head of grey locks and goatee beard, Billy is instantly recognisable by physical appearance. His confidence and storytelling are what really what make Billy as an entertainer, though. Unable to tell a tale without a quick quip at how ‘he’s big over there’ or how he’s recognised by everyone from policeman to drug dealers, adds a cheeky spirit you can’t help but love.

One thing as a Scotsman Connolly really taps into is people’s love for swearing. Dropping ‘c-bombs’ like they’re going out fashion, he never actually overuses the cursing: each one perfectly timed with just the right amount of punch that no other word could give.

He doesn’t swerve away from the vulgar and gruesome either. Going into detail of his penile surgery (a particular highlight being his view from the camera in there reminding him of an aquarium) or when someone died during his musical performance at a hospice.

Despite his spirit being present through his words, it’s hard not to initially be distracted by his still stance and lack of animated movements. As Connolly explains (with a few jokes, mind), he has Parkinson’s disease. It’s rare not to see comedians using their hands and bodies to accompany their comedy and uplift it. Although at first, it can seem quite unnatural especially with the close-ups where Connolly appears to look at the camera, it never takes away from his comedy and in fact, makes a lot of his humour more deadpan. Later on, when he’s telling stories about his acting career, he starts to loosen up and become a lot more animated. At this point, Connolly doesn’t bother with transitions and just starts reeling off stories, which in itself is a laugh.

Whatever way he performs, not only is Billy Connolly a brave inspiration but a very talented and hilarious man and this performance proves he’s still got it.