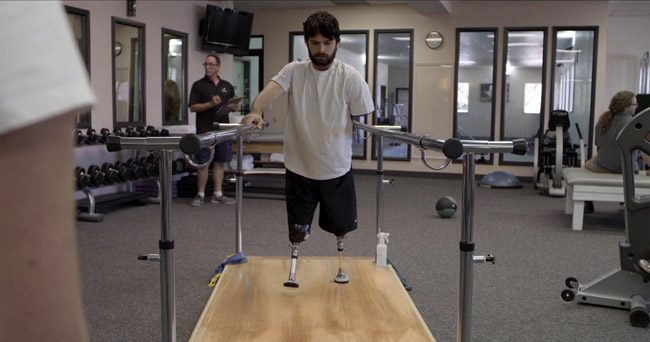 Birthdays are generally synonymous with joy, celebration, and high spirits. And while writer and director, Chris King, titled his short film ‘Birthday’, the emotions at play are rather contrasting initially.

Focusing on a young marine who gets severely wounded in combat, the 12 minute run time explores the immediate next steps in his life from hospital bed to physiotherapy with artificial limbs, and finally his transition home in time for his birthday. All along the way, we see the support of his wife, the strain on her emotions, and the strength of their relationship through this journey.

Because the opening few minutes are spent with the couple video calling, counting down the days till they see each other again, the moment soon after when the marine takes his fateful step has more of an effect. The dialogue between the leads allows us to understand and know the characters before the shock which lifts the rest of the film as we watch how their relationship changes but also and most interestingly, how it doesn’t.

What’s most fascinating is the lack of speech thereafter. This isn’t through the lack of dialogue for the characters but actually because the audio of their words isn’t used. Instead, an emotional score is used as the only sound for a lot of the scenes following. Sometimes it’s clear what’s being said: cursing out of frustration or pain, or laughter and encouraging words. Other times, we’re left to guess as Chris Gouche and Mandy More, playing the marine and his wife respectfully, display incredibly moving and grounded performances without needing to hear a word.

As a short film, time is condensed in their story, which actually works for the better. Each shot says a thousand words, not only showing audiences what happens to injured soldiers, but really communicating the impact emotionally as these characters, and the actors which play them, embody the every man and woman, that just so happened to be so very unfortunate on just one day in their lives.

It turns out that the ideas associated with the word ‘birthday’ aren’t so far removed from this story. There are moments of joy as the marine takes his first steps, celebration as he reconnects with friends, and high spirits when him and his wife’s relationship is stronger than other. ‘Birthday’ is a moving piece, told beautifully through not only its performances but its simplicity.