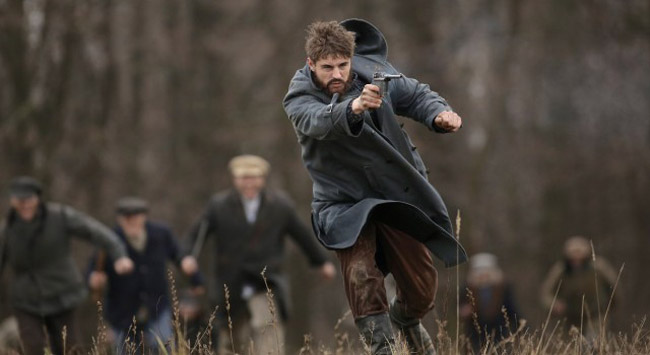 When retelling important parts of world history we are almost, most certainly, presented with a slightly skewed version, one of bias, surrounding the truth of events that played out and always what we are lead to believe happened. Bitter Harvest, which centres around Joseph Stalin’s 1930’s ‘genocidal’ policies, is placed firmly into that mould.

Part love story, part political hammering of honour and rebellion, Bitter Harvest focuses on the fictional story of the young pacifist artist Yuri (Max Irons) and his love for his childhood sweetheart and wife Natalka (Samantha Barks) and their fight for survival in a time where communist leader Joseph Stalin was reported to have put a starvation policy into full force. Whilst his family struggle on the farm, Yuri travels to Kiev to study art, but once in Kiev becomes embroiled in a political rebellion when his art is deemed to go against the soviet, forced to leave the academy and his involvement with a rebellion party see’s him imprisoned and tortured.

Iron’s gives an emotionally impactful performance and proves his penchant for diverse roles is exactly what he thrives on. Iron’s, who last seen on our Television screens in Tutankhamun as archaeologist Howard Carter, proves juggling TV and Film seems to come second nature to him, previously starring in The Riot Club and Philippa Gregory’s TV adaptation of The White Queen , which see’s him teaming up again with his onscreen Brother and Richard III actor Aneurin Barnard in this project.

Whilst Yuri is away, it’s not all a bed of roses back home in his village, the Bolshevik officer’s run amok, torturing and killing those that go against their regime. Yuri’s steadfast rebel grandfather Ivan (Terence Stamp) finds he has no option but to let Natalka, in order to keep her family safe, be used and abused by the brute force of Bolshevik leader Sergei (Tamar Hassan). The first quarter of the film is full of visual symbolic offerings with Black and white horses used to identify between good and evil.

Whilst this is a British production, the story is Ukrainian and was even filmed on location in the Ukraine; the foremost jarring issue concerns all of the British cast, all sounding frightfully English considering they are playing Ukrainian villagers and farmers, no effort of an accent is heard which is lacking in an authenticity this story needs.

An underlying insight emerges from Bitter Harvest, one that shows how one person can change from a quiet, non-violent man into that of a fighting beast. Pushed to his very limits by the atrocities he witnesses and endures himself Yuri escapes from a Soviet prison and joins the anti-Bolshevik resistance movement to make his way home and save his family. The vision to link all the narrative together fails to have any fluidity and we jump from scene to scene with a disjointed rambling creating a mass of messy scenes.

Director and co-writer, George Mendeluk may have seen similarities of his own parent’s story laced in the screenplay but this disjointed love affair/rebellion story is lacking in a clear structure, portraying a bit of a rush job to get it finished.

Bitter Harvest is out in cinemas February 24th.