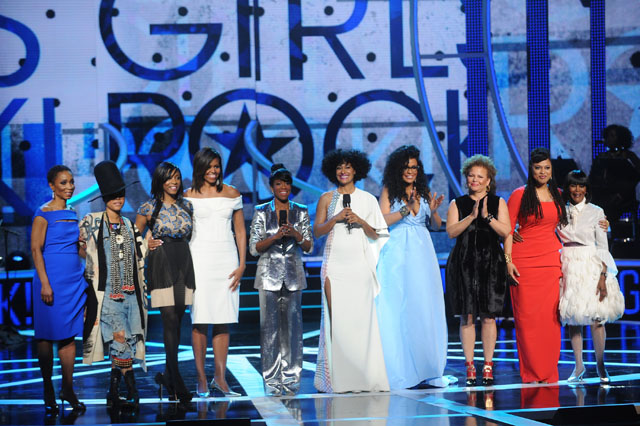 Arriving at its fifth successful year, Black Girls Rock 2015 is one of the few platforms that celebrates the achievements of women of colour across the globe.

This award show was created by founder Beverly Bond and has grown from strength to strength. With alumni of accomplished honourees, that includes women who excel in their field of work.  The show focuses on women from a range of industries which includes the likes of medicine, sports, finance, entertainment, education, as well acknowledging those who work to uplift their communities by creating their own social enterprises through mentoring.

Black Girls Rock 2015 has served as a platform to empower, inform, highlight, influence and challenge the perceptions of Black women that have been portrayed through mainstream media throughout the years.

The Smith Family
Opening the show was the incredibly talented Sheila E, getting the audience up on their feet as she performed her hit classic song “Glamorous Life.”

Drummer and singer, Sheila E
The biggest and most notable guest of the night was the First Lady of the United States, Michelle Obama.  As an honoured guest, the FLOTUS made her debut appearance on the show, looking amazing in an all-white off the shoulder Zac Posen dress. Greeted by a standing ovation, she gave a rousing speech in which she addressed the audience in talking about her own personal experiences growing up as a black woman in America, dealing with confidence issues and how present and future generation of young black women can best choose to deal with the same issues she faced whilst growing up.

The First Lady of the Unites States, Michelle Obama

“I know there are voices that you are not good enough.” Each of those doubts was like a test, that I either shrink away from or rise to meet. And I decided to rise!” Michelle Obama

She also let the audience know how proud she and her husband, the President of the United States, Barack Obama, feel about the array of positive black women and the work that they do.

The event itself is about celebrating sister hood, which is the message the show successfully showed throughout the night and the very foundation that this platform is built on. This was more than evident as each honouree gave brilliant speeches expressing why “Black Girls Rock” and why it’s important to keep “rocking!”

Honouree of the Rock Star award, Erykah Badu, gave a speech in which I imagine her waking up in the morning and making this her daily mantra.  She spoke about seeing five doctors a day, Dr Sun, Dr Nutrition, Dr Exercise, Dr Spirit and Dr You. Affirming that love of self, comes of taking care of one’s self.

Honouree: Singer Erykah Badu
Nadia Lopez, a Brooklyn principle honouree, spoke about opening her own school because she found that the education that her own daughter was receiving was unsatisfactory.  Raising over a million dollars to start her school, Nadia Lopez urge parents to get involved with their communities and start building and nurturing children from inside the home.

Honouree: Nadia Lopez
Up next, our very own UK talent, Estelle, who has shown how she is an example of Black Girls who rock outside the U.S, took to the stage to perform the single “Conqueror” that was recently aired on US smash hit series, Empire.

The Star Power Award was given to Honouree, Jada Pinkett-Smith.  The award itself was presented to her by her husband, actor Will Smith.  Speaking lovingly about his wife and how they met, during her time on hit TV show, “A Different World”.  After 20years of marriage, Will gushed during his speech, as he confessed that he couldn’t imagine life without the formidable actress and mother to his two children, Will and Jaden.  Approaching the stage to accept her award, Jada looked amazing in a fitted white dress, which hugged her petite frame.  She spoke powerfully about African American women still having work to do, reminding us all that in order to be treated like a queen; we have to act like one.  Her speech was followed by performances from Erykah Badu and Ciara.

Honouree, actress and activist, Jada Pinkett Smith and her husband, Will Smith
Selma producer, Ava DuVernay was the recipient of the “Shot Caller” award.  Her speech addressed young girls and not being afraid to say “Yes”.  Yes to deciding on what you need to be the “leading lady in your own film”.

Honouree: Film producer, Ava Duvernay
A shared musical performance from Faith Evans, Fantasia Burrino and Lala Hathaway, which saw the songstresses pay tribute to #blacklivesmatter campaign.  Past photos of the struggles of African Americans were presented during the performance, which was a quick reminder of how far they have come and what they still have to fight for.
The show itself would not be complete if founder and CEO, Beverly Bond, did not give her annual speech, reminding us all as to why she felt compelled to create this much needed platform.  Dressed in a powder blue ball gown, she addressed the importance of black women having confidence past our external physicality “Our girls need to gain confidence to become trail blazers, change makers and shot callers!” Beverly Bond

Founder of Black Girls Rock, Beverly Bond
Few women in entertainment have the respected and long career of actress, Cicely Tyson.  The respect of this incredible woman was clearly demonstrated as she approached the stage to a standing ovation to receive her honorary award.  Addressing the audience in her speech, Miss Tyson said “To the young women, the moment anyone tries to demean or degrade you, you have to know how great you are.  No one will bother to put you down if you are not a threat to them.  You are a young, brilliant, attractive woman” Cicely Tyson

Honouree, actress, Cicley Tyson
A wonderful and memorable close to a show, that echoes, lives and breathes the affirmations of the night’s honourees.