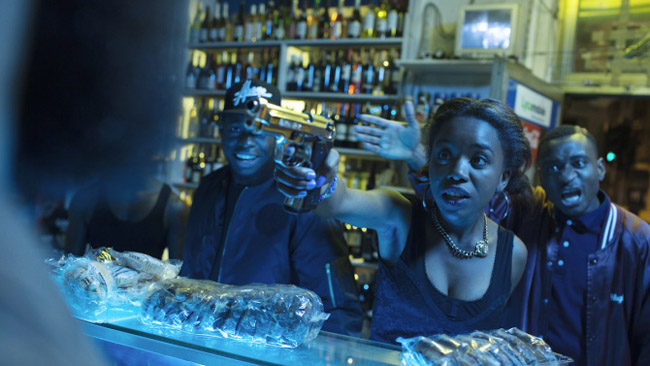 In 2014, we were graced with a gritty street drama in Girlhood; it created a massive buzz and a huge amount of praise from critics all over. Two years later, Black burst into the Toronto Film Festival in a blaze of glory. Another street drama, this time from Belgium and not France, which saw it pick up the Discovery Award at the Festival.

Directed by two virtually unknown young directors, Adil El Arbah and Bilall Fallah, Black is a brutal and powerful story which caught the interest of both Eddie Murphy and Jerry Bruckheimer which consequently lead to the two youngsters being employed to direct the new Beverly Hills Cop movie. This may be a dark and violent journey into Belgian youth gang culture but it also has a touching yet dangerous love story at its very core; think West Side Story meets Romeo and Juliet for the 21st century.

Heavily loaded with a bass thumping hip-hop soundtrack, including a cover of Amy Winehouse’s Back to Black, Black has a cast plucked from the streets from minority backgrounds. We are introduced to two sets of cocky teenagers, full of disrespect and into petty crime. Mavela (Martha Canga Antonio), a 15-year-old Black Girl who belongs to the gang, The Black Bronx – not that she has much of a choice – and Marwan (Aboubakr Bensaihi), a young Moroccan boy from the rival gang the 1080’s. When Marwan’s older brother takes the full rap for their credit card fraud Marwan is practically left in charge of the gang. With a chance meeting in the local shopping center with Mavela, the pair falls for each other.

Before too long, the pair finds themselves embroiled in secret meetings to hide their love for each other. After a warning from the police regarding the Black Bronx and how they treat their female gang members and witnessing the brutal gang rape of Marwan’s brother’s girlfriend, Mavela starts to question what she has gotten herself into. However, after The Black Bronx discovers Mavela and Marwan’s secret relationship she falls prey to the sexual violence herself, and to save Marwan’s life, she pledges her loyalty to the gang until one tragic and fatal night.

Black may be full of sexual gang violence and harrowing scenes but what makes this extremely real is the simple fact that it is based so close to reality. The film which is based on two novels from the author Dirk Bracke called Back and Black, saw the author immerse himself into his research accompanying police during their investigations into gangs in Brussels, which will probably meet the natives with total disbelief.

Black doesn’t always flow smoothly, jumping abruptly at times to completely different scenes, visually it’s also extremely glossy and sharp, something this edgy needs to be portrayed without that shine so the true grit and horror of the plot can thrive. However, the major star to come out of this is Martha Canga Antonio, her performance is pure brilliance from her vulnerability to her hard stance after her ordeal.

Black is released on the 19th of August.