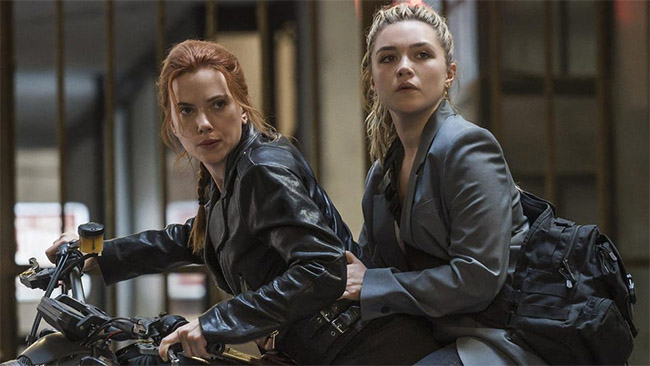 Having first appeared in Iron Man 2 back in 2010 it’s taken 11 years (with a pandemic delay) for Scarlett Johansson’s Black Widow to finally get her own standalone film.

The spotlight should firmly be on her, or so you would have thought, but for all its acrobatic female kick-ass baddery poor old Natasha Romanoff has to share that limelight with her highly skilled “family” to bring down the patriarchy.

Thankfully, this isn’t another origin story but it does shed light on Natasha’s past and how she got to where we see her here. Set after the fallout of Captain America: Civil War, Natasha is on the run from the authorities and without her Avenger’s family. Having received a package from her spunky assassin sister Yelena (Florence Pugh) – because super-powered assassin shit runs in the “family” – Natasha takes the opportunity to revisit her past and indulge in a reunion. As the ladies take sibling rivalry to whole new levels after first reuniting – Yelena likes to mock her hair-flicking fight pose ready older sibling – it appears their past isn’t dead and buried and the leader of the Russian sleeper-cell Dreykov (Ray Winston) with a gaggle of Black Widows at the ready, are all but ready to take Natasha down once and for all.

Fortunately for Natasha, she does get back up and shares the stage with her self-serving and conceited “Father” Alexi played with spot-on comedic timing by David Harbour. A kind of superhero in his own right, he possesses super strength and an obsession with Captain America and has anger issues akin to Bruce Banner’s Hulk. While Harbour plays the brawn, Rachel Weisz plays the brains of this family unit as “Mother” Melinda. She’s a tech-savvy strategist (who could have been the female version of Tony Stark) with all the sleek fighting skills taught in Dreykov’s Red Room.

Director Cate Shortland has mainly stuck with the winning formula for this universe, as with any Marvel film, you would expect high octane, knuckle crunching action from the very get-go and this doesn’t disappoint. Its action and fight sequences are a sight to behold while the humour has been toned down; there is still a number of laugh out loud moments that will please everyone. The major difference comes in its melodrama and its aesthetics, which at times are on a par with what you would expect from an independent offering.

A fairly rousing and impressive cog in the MCU machine – which has a few dodgy CGI moments – but it doesn’t quite give Natasha the limelight she deserves but more sets up a future for Pugh’s Yelena. That being said, I didn’t release how much I missed a fresh Marvel film until this Widow ate me for dinner.