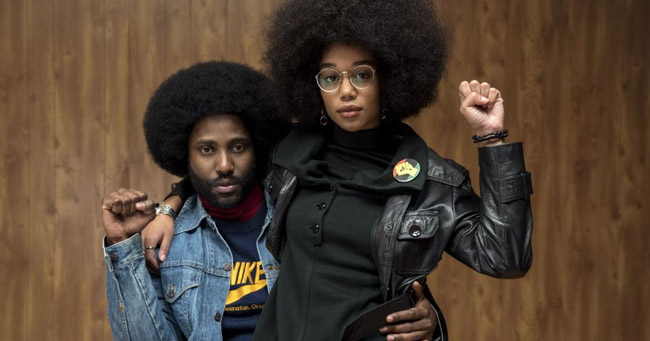 Renowned filmmaker, Spike Lee is back with full force. Never one to shy away from racial issues, Lee tackles a watered-down true story of Ron Stallworth, the African American detective who infiltrated the Ku Klux Klan in the 70’s with Blackklansman. Falling fiercely at an appropriate time where open racism is undoubtedly on the rise, it’s a timely reminder that civilisation really hasn’t evolved from its blind stupidity.

Infused with comedy and sometimes questionable actions of the US police force; we have to remember that this retelling of a historical event is made, not just to highlight the state in which our world, and in particular America, has descended but it’s also made for entertainment purposes. Nonetheless, its fundamental theme embodies Power whether we have it or not.

Based in the 70’s, the story centres on Ron Stallworth (John David Washington), one of the first African American detectives in the Colorado Springs police force. Stuck doggedly in the records room, he strives to unquestionably be a key part of the action and to make a difference. After getting a taste of being undercover in an activist meeting, Stallworth grabs his chance at a bigger operation after he spots a recruitment ad for the KKK in the local paper. After numerous phone calls with the Klansmen, he finally convinces them he is KKK material and the group invite him to a meeting.

For obvious reasons, Stallworth has to establish his own team together and dutifully sends in his white, Jewish colleague, Flip Zimmerman (Adam Driver) to represent the face of his voice. The plan is to unravel a devilish plot, but events unfold which puts their lives in danger.

Throughout, Lee makes subtle links between 70’s America and the current Trump era. One eyebrow-raising speech from the brainless grand wizard of the KKK, David Duke (Topher Grace) refers to their perseverance in their considerable efforts until a political force has been placed in the White House. Other events that render the audience into sombre silence comes in the real-life footage taken from the 2017 white supremacist rallies in Charlottesville.

Lee also uses cinema and photography to aggressively enforce the unusual juxtaposition throughout, highlighting the offensive depictions that have plagued film over the years. Films like Gone with the Wind, Tarzan and even the 1915 The Birth of a Nation which glorifies the KKK get a stomach-churning and anger-inducing outing. In one emotional scene, Harry Belafonte features as elder activist delivering a powerfully sad speech, retelling the harrowing story of the notorious lynching of Jesse Washington in 1916 aided with harrowing images.

Lee’s newest joint is undoubtedly a raging inferno of all too relevant social commentary. It’s a powerhouse spine tingler which proactively manages to kick racism in the balls at brute force with both classic humour and infuriating heartbreak. A poignant reminder that America has regressed into bleak times and makes you shed a burning tear for modern humanity.