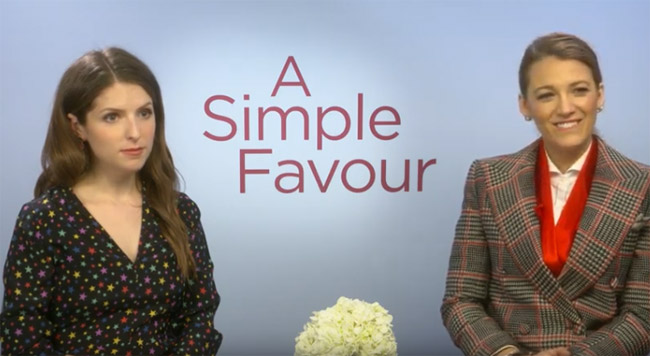 Back at the time of its cinema release, Paul Feig’s slick, stylish and ultimately funny ‘A Simple Favour’ was a hit with both critics and audiences alike. Starring Blake Lively and Anna Kendrick who proved to be a female force to be reckoned with on so many devious levels.

Based on the novel by Darcey Bell, ‘A Simple Favour’ centres around Stephanie (Anna Kendrick), a mummy vlogger who seeks to unearth the truth behind the sudden disappearance of her best friend Emily Nelson (Blake Lively). Alongside Emily’s husband Sean (Henry Golding; Crazy Rich Asians), Stephanie quickly finds herself in a high-stakes game of lies and deception as she realizes she may have never known Emily at all.

Kendrick brought her strong housewife game to the table but she certainly wasn’t one to misjudge in the film. Anna Kendrick is already known for her unique range.  Even so, the role of Stephanie was something completely different for her. Stephanie might share some qualities with Kendrick, such as her exuberance and her everywoman amiability, but there is much more to the performance as Kendrick brings all at once a flair for mischievous humour, emotional complexity and an unleashed fierceness.

For Feig, there was simply no other actor for the part. “I love all Anna’s performances, but I especially love her when she plays people who are sweet and helpful and candid—and that is Stephanie. Every time she’s on screen, you just fall in love with her,” he observes. “And yet…she also has this really acerbic side, which is hilarious, so I knew Anna would make sure Stephanie isn’t a pushover.”

Lively saw the story as harking back to the Golden Age of Hollywood’s thrillers with their comic-tinged theatricality, but also unsettling undercurrents. “A Simple Favour reminded me of some of my favourite films from the past, the ones where you don’t know what’s going to happen up until the LAST minute,” she says.  “I love Laura, Gaslight, Whatever Happened to Baby Jane, All About Eve… A Simple Favour pays homage to those hyper-stylized, thrilling films with a tense storyline and characters who are purposely a bit over the top.”

She continues, “We have different iterations of ourselves that we put out into the world—our social media “personality” versus who we are at home, who we are at home vs who we are at work, etc. In this film, I think there’s an interesting examination of that— who we are vs who we present ourselves to be. Women are nurtured to strive to maintain a certain level of perfection, whether outward or inward, but we are all imperfect and that’s a conversation that’s much more awesome to me than perfection. Exposing true selves is something the characters ultimately do in this film. And you love them all the more for it.”

Watch the full interview with both Kendrick and Lively below;

A Simple Favour is out now on DVD and Blu-ray