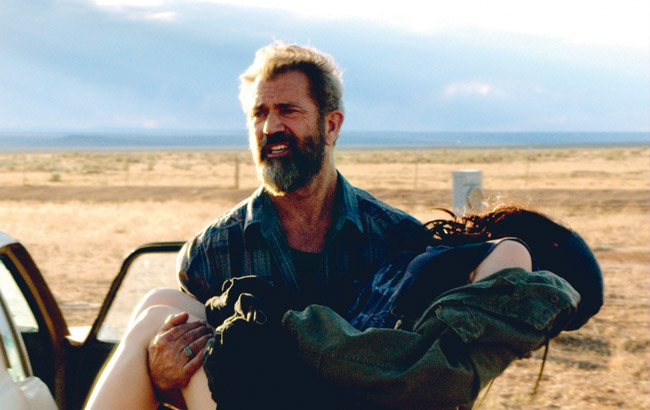 When Blood Father opens with a scene showing a young girl buying a copious amount of bullets but only when she asks for a packet of cigarettes is asked for ID you know you’re in for one hell of a tongue in cheek brutal ride of pure action packed frivolity.

Aiding the shoot-em-up party in Blood Father is the return of Mel Gibson after his much publicised battle with alcohol, drugs and temper tantrums, looking all of his 60 years with a full on beard that hardly covers the deep set lines on his aging face but oddly still attractive and clearly having spent a lot of time in the gym with his muscular build.

Gibson plays Link – An absent father laden with tattoos, an ex-con battling an alcohol addiction living in a trailer park with his own trailer as a base for his tattoo parlour. When his long lost daughter Lydia – played with an expressively powerful and staunch performance from Erin Moriarty – call’s him in trouble after she has shot her supposedly drug kingpin Mexican boyfriend Jonah (Diego Luna), in fear of her life, Gibson plays the doting father and welcomes her into his safe haven for protection. It isn’t long before Jonah’s henchmen find her, unleashing a hail of bullets at the trailer. All that matters to link is his own daughter’s life, so the only option is to go on the run from the cartel even if it means putting his own freedom into jeopardy by breaking his parole conditions.

With help – and betrayal – from old friends of Link the father, daughter duo proves a formidable force against the cartel, outmanoeuvring every shot and escaping at the last minute until they simply can’t run anymore.

Director Jean-Francois Richet has taken a gamble on making Blood Father Gibson’s comeback movie – but this is one gamble that pays off well – No matter of Gibson’s personal problems and racial slurs there is no denying that his acting talent has not waned, his rousingly commanding performance and deliverance of humour make this a highly watchable and entertaining romp, which, without the leading stars would be just another average brutal chase movie with a predictable plot.

Blood Father is out in cinemas October 7.