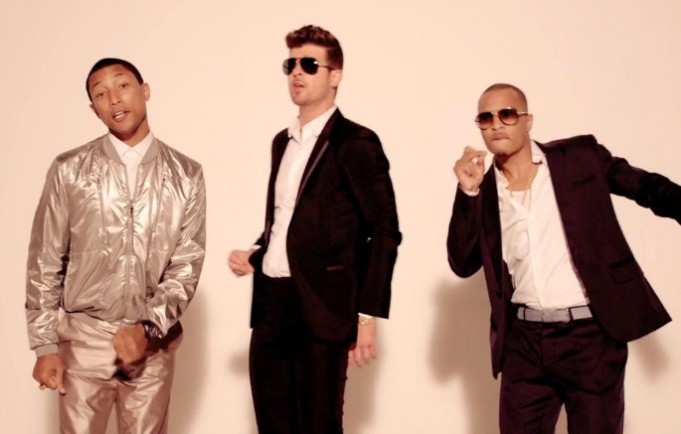 This story of a jury in the United States which ruled that the writers of Blurred Lines, one of the best-selling singles of all time, copied Marvin Gaye’s track ‘Got To Give It Up’ and has awarded the Gaye Family $7m.

We can all hear that the instrumental of the track is a direct copy of Marvin Gaye’s hit. It’s so close in comparison that when you mix the 2 tracks on DJ decks, the speed and pitch of both tracks are identical and mix seamlessly.

We would have thought that Pharrell and Robin Thicke and the record labels behind this song, would have known that it’s a direct copy and would have expected to be sued by the Gaye. However they released the song anyway and it became one of the biggest selling songs of all time.

Thicke and Williams denied copying the hit, and their lawyer said the ruling set a “horrible precedent”.

Gaye died in April 1984, leaving his children the copyright to his music.

His children – Nona, Frankie and Marvin Gaye III – sued Thicke and Williams in 2013. Nona wept as the verdict was read in court.

“Right now, I feel free,” she told reporters after the ruling. “Free from… Pharrell Williams and Robin Thicke’s chains and what they tried to keep on us and the lies that were told.”

The hit, which earned a Grammy nomination, generated more than $16m (£10.8) in profits and made more than $5m (£3m) for both stars. The family of the late soul singer has been awarded $7.3m (£4.8m) in damages. Which basically means that Robin Thicke, Pharrell and the record labels still made a huge profit.

You can see a larger report on the BBC here.

This could have huge implications on American music, as Americans have a love affair of remixing the old skool into new skool.

The Blurred Lines Between Inspiration and Copyright Infringement – comment piece.

On Tuesday, the District Court of Southern California ruled that the Robin Thicke song Blurred Lines was in fact an infringement of Marvin Gaye’s Got To Give It Up. The case raises some important issues about the distinction between inspiration from previous artists and infringement of their work.

The case centred on the difference between direct infringement of a copyright work and writing within a particular style of music. Pharrell Williams’ lawyers argued that this was merely a case of the latter, and it was not possible to have copyright in a musical style.

The trial involved testimony and analysis from musicologists who analysed both songs for their similarity (or lack thereof) in an effort to persuade the jury in this case of their side’s argument. The jury found, based upon the arguments presented to them, that infringement had in fact occurred.

This case does raise a few interesting issues regarding copying a piece of music rather than just drawing inspiration from it. There was no doubt in this case that Pharrell Williams had access to the Marvin Gaye track, having described it as part of the ‘soundtrack of his childhood’. However he has said that he did not copy the song, and that his songwriting in this case came “from the heart and mind” of himself and his co-creators of Blurred Lines.

Copyright law does not require copying to be deliberate, or for there to be any particular motive demonstrated in order for liability to arise. There are numerous cases involving accusation of copyright infringement in the music business (most of them settled quietly out of court) but most of those involved would argue that where there has been copying, that this is not deliberate, even when they are the ones being copied. For example, when an issue involving Tom Petty’s I Won’t Back Down being copied in Sam Smith’s Stay With Me arose recently, Petty declared “these things can happen” after a settlement was reached. Copying is a matter of objective judgment based upon access to the prior work and similarity between the two.

So where does inspiration cross over into copying? Copyright exists only in the expression of the music and lyrics itself, and therefore any general ideas as to style are not covered. The Pharrell Williams case involved comparisons of bass lines, ‘hooks’, chord sequences, and so on. Where such identifiable similarities exist, then this can be the basis for infringement action. However it is possible to mimic style without copying any of these things, as surrounding ‘atmosphere’ and the ‘groove’ of the recording were not part of what could be considered in comparing Blurred Lines to Got To Give It Up. Importantly for this case, the jury were only allowed to consider the sheet music for Marvin Gaye’s song as this was all that could be lodged with the Copyright Office under the law at the time.

The consequence for this judgment could be wide-reaching for the music industry in terms of what is ‘homage’ to previous work, and what is ‘copying’ that work. Pharrell Williams’ lawyers have declared that this “sets a horrible precedent for music and creativity”. The Gaye family would argue differently, and that Williams went beyond merely emulating the style of Marvin Gaye to copying his music. In this respect, the distinction between the two things have been clarified in this case, and the issue of whether this is an infringement or merely inspiration.

The only certainty here is that this issue will probably run on for a while yet, with an appeal coming from Pharrell Williams’ lawyers, this is likely to end up in a much higher court within the US judicial system.

The question we are asking is what does this mean for future music? Has this set a new precedence for copyright? Leave your comments below