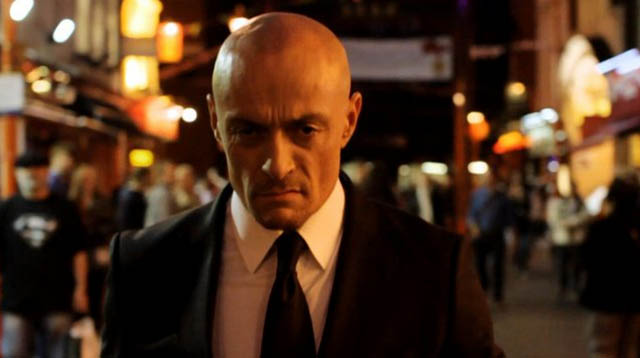 When your offered a chance to interview an actor who is notorious for playing villains and looks like he is about to kill you with one glance you don’t really turn down the opportunity. Actor/Director, Sean Cronin was kind enough to sit down with us and give us the low down on his directing for his new film ‘Give Them Wings’.

Everyone loves a villain and I love being a villain

Most people will recognise you as the villain from Bond’s The World is Not Enough, The Mummy and Harry Potter and The Chamber of Secrets amongst others, But you’re not just an actor who seems to attract evil roles, you are also a Director. Which do you prefer, being in front or behind the camera?

Everyone loves a villain and I love being a villain.  However, directing for me is a much higher calling, as you are able to control and make the whole vision a reality.

2015 see’s you take to the Director’s chair again for the Biopic Give Them Wings which tells the story of disabled football fan Paul Hodgson and his struggles with his disability. Can you give the Flavourmag audience a brief synopsis of the film?

Give Them Wings is a feel good movie about a disabled football fan, whose father finds it hard to accept his disabilities.  His lack of support forces him to leave home and the film follows his journey and his extraordinary attitude to the circumstances that he finds himself in.

What drew you to Paul’s story and why you wanted to take it to the big screen?

Most people that have been dealt a hand of cards like Paul has, have a chip on their shoulder and quite rightly so, but what is wonderful about Paul is his acceptance of his condition.  His positive outlook and his dark sense of humour really make him a special person.  A great example of this was when I first met Paul, as he said he could not walk, but he could hold a beer. You’ve got the likes of Bill Fellows and Mark Stobbart (who will play Paul Hodgeson) all part of the cast for the film. Did you already have these great British actors in mind when you took on this project or was choosing the actors a long drawn out process?

We shot a concept teaser for the film about a year and a half ago, at that time we found and used Mark Stobbart and James Baxter.  They were so convincing in the teaser, that we decided to use them for the feature as well.

Was it easy convincing these actors to be part of the film?

They all know and love Paul, as well as the script.  It is a fantastic journey from the depths of despair to the heights of happiness.

Is there anyone in particular you wanted and couldn’t get on board?

We are currently in talks with two A-List actors that would add production value and theatrical success.

It’s very rare we get to see films that focus on those who have a disability; What I love about the British Film Industry is it isn’t afraid to take on these usually taboo subjects, therefore it’s refreshing to hear your taking on this project. Did you have any problems getting this project off the ground?

It took a while to get funding, because we are not going down the route of just having A-List talent.  This is simply because when you have actors that everyone knows, it can be harder to believe every character that they play.  We are making a realistic film for the British film industry and want it to be as realistic as possible.

If all goes according to plan when do you expect to have the film finished and released?

What else is in the pipeline in 2015 for Sean Cronin?

I am currently appearing in Mission Impossible 5 with Tom Cruise and will be filming more of that in the New Year.  I am also in development of our fantastic period drama Iron Gate and a slate of other films in the works.