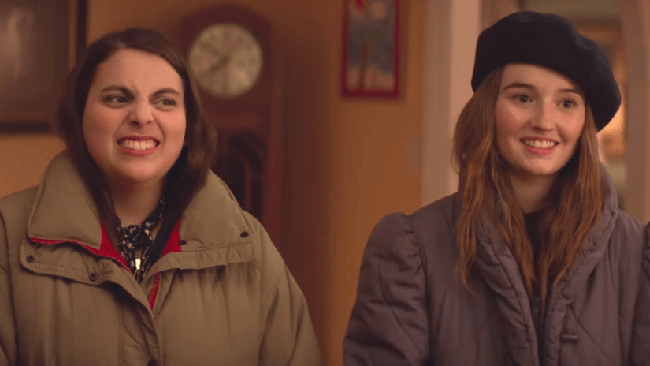 Hilariously smart, audaciously original and expertly performed this is a top contender for comedy of the year.

Nerdy best friends Molly (Beanie Feldstein) and Amy (Kaitlyn Dever) have been friends since they were practically in nappies. Over the years, the pair has dedicated themselves to studying hard to get the top grades. Unbeknownst to them, the party hard “slackers” have also made the grade for their top Ivy League choices.  Now, in their final days of high school, before Molly goes to Yale and Amy takes a year out to help young women in Botswana with their sanitary issues, they vow to join the popular crowd to party like its 1999.

In their rush to get to the only party worth attending, Wilde throws in a few slick, fast-paced obstacles in their path, heightening not only the girl’s anticipation to get their flirt on with their crushes but also opens the floodgates to some almighty laughs. Being hijacked to attend a lavish yet empty boat party to accidentally getting so off their faces resulting in an animated sequence in which the girls imagine they are Barbie dolls are only just a dip in the water of the highly relevant high jinks and hilarity that give life to such a smart comedy.

Feldstein and Dever are a comedy match made in heaven, Feldstein takes on the self-confident bossy, go get em comedian whilst Dever plays the more cautious dependant one, both fantastically performed but each individual’s traits cause a natural flare-up between the inseparable duo causing a heart-wrenching rift in their otherwise unbreakable friendship.

Unlike the pretentions of Lady Bird, Wilde’s interpretation of the everyday teen female friendship makes this a whole spectrum more relatable and accessible to a larger audience base and can be enjoyed not just by the YA audiences but by a more mature one too. Hilariously smart, audaciously original and expertly performed this is a top contender for comedy of the year.

Booksmart hits cinemas on the May 27th