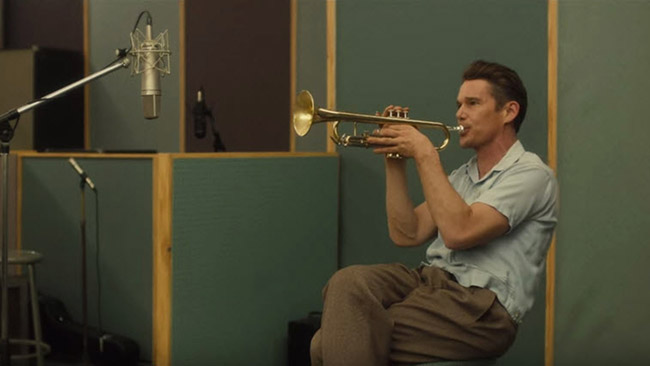 Born to be Blue adds its name to this year’s expanding list of biopics with a difference. This time looking at a period in the life of Jazz musician Chet Baker played here by an exceptional Ethan Hawke. It’s Hawke’s performance that uplifts this story from what can be a very slow almost humdrum of a film.

Following in slightly the same vein as Don Cheadle’s Miles Ahead, Born to be Blue isn’t just all pure fact. The foundations of the story are true like the fact he was a highly dependent heroin user, and that he had his own struggles as a white man trying to come good in a genre of music which is dominated by the rightfully so, talents of black men.  Baker craved the respect and approval from the likes of Davis himself, especially after Davis tells Baker to ‘Go back home, this isn’t a place for you’. Entering the film with a film within a film, confused? Don’t be! We see Baker playing himself in a film about himself. It quickly unravels to make this perfectly clear. Baker becomes extremely close to Jane (Carmen Ejogo), the woman who plays his on-screen love interest leading to a passionate relationship between the pair. Jane becomes his rock and almost another addiction for Baker to cling onto after he is badly beaten. He loses his teeth making it nay on impossible for him to ever play the trumpet again.

As the pair is forced to live together in a caravan we are transported back and forth through Baker’s career whilst he gets back on his feet. Flashback sequences are played out in black and white which gives a smokey yet stylish ambiance that matches the backdrop of Baker’s music. The only problem is it lacks any real energy, the film bumbles along at a steady pace but never quite hits the high notes it’s crying out for to make this an engaging watch.

We learn how Baker has issues with his father, who gave up on music himself, fighting to win his approval but never quite living up to it. Ultimately, as Baker finds himself in musical demand once more the devilish heroin addiction is too hard to resist. He may have got back his love in music but loses the one person who believed and supported him through his comeback.

Ethan Hawke is known for his love for starring in the independents and it’s his performance here as an engaging and charming Baker that is one of Born to be Blues saving grace.

Born to be Blue is released in UK Cinemas Monday, July 25.