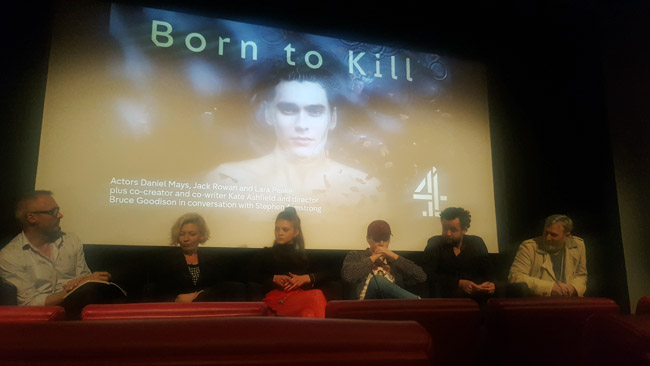 A few weeks back Flavourmag attended a preview screening and Q&A for Channel 4’s upcoming chilling new four-part drama Born To Kill that had the show’s director, writer and stars Daniel Mays, Laura Peake and newcomer Jack Rowan in attendance.

Born to Kill – What is the show about?

Coming from the makers of Line of Duty, Born to Kill is an atmospheric and chilling coming of age, a four-part drama exploring the mind of Sam, played by Jack Rowan who has a striking resemblance to the late Star Trek actor Anton Yelchin. Sam is a slightly odd teenager with minimal friends, of his own choosing,  until the new girl, teenage tear away Chrissy (Laura Peake) joins the school along with her widowed Father (Daniel Mays) in tow. Sam spends most of his free time in the hospital where his single mother, Jenny (Romola Garai) works as a nurse reading to elderly patients, acting as a comfort before they pass away. However, far from Sam’s knowledge, his mother Jenny is hoarding a deep dark family secret which slowly unravels along with Sam’s facade of being this quiet nice boy as his dark suppressed psychopathic desires come flooding to the surface in more ways than one.

The cast and crew on the show Q&A Following on from the preview of the show, the Q&A ensued with co-creator and writer Kate Ashfield and director Bruce Goodison joining Mays, Peak and Rowan to talk about the show and their characters in detail.

Laura Peake describing her character stated, “Bruce (Goodison, director) and I discussed whether Crissy was a psychopath, I think she definitely possesses some traits but the thing with psychopaths, from the research we carried out, there is a formula that makes them, there have to be a few factors. She’s just drawn in by Sam, she’s lost anyway, and she’s intoxicated by him. She’s happy to just have someone to reach out too”

Jack went on to discuss his preparation to play the role of a psychopath “It was really fun to prep for. With complex characters like Sam, I would prefer to play characters like that because they are so much to get from them in terms of the research, that period was just fun. The production crew sent me documentaries and the like and it leads to more. Each day I would watch a film and it inspired me to be that guy, then I’d watch a documentary and thought I want to be that psychopath it went on. It came to a point where I had to think well who is Sam? I wanted to create my own version of a psychopath”

When asked about the aesthetics of the show and its importance to telling the story director Bruce Goodison said “Our biggest challenge with this serial was how do we bring an audience closer to someone who has no empathy for others because ultimately he is going to end up killing someone. I was trying to give the audience as much access emotionally to how that happened. It was just about making sure we edged up at every moment that we could. Whether that be observing a dying bird etc. We try to build that subconscious level then the conscious level sits on top of that really nicely”