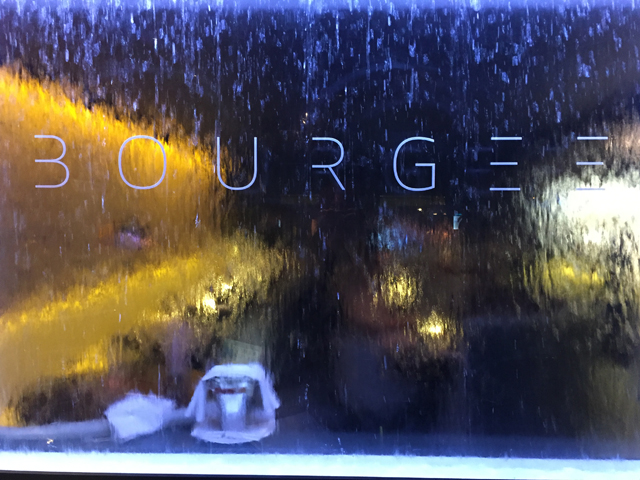 When you think of renowned steak and lobster eateries, there’s probably a few that pop to mind but Bourgee, having left all gimmicks to their London neighbours, have created a dining concept that exudes showmanship, elegance and sophistication, whilst shining a beacon on their josper grilling machine, which gave so many of the dishes sampled their unique bbq flavour.

Moreover Bourgee dismisses any beliefs that luxurious fine dining can only be enjoyed by the select few. With so many options including day and evening set menus, al la carte and Sunday lunch to name a few, there really is something for all budgets, should you want to splurge or spend like a rockstar. Ensuring visitors were met with a courteous smile were two well groomed ladies, who saw that we were efficiently shown to our perfectly manicured table. Heads up that ever since Bourgee Chelmsford opened last month, reservations for evening weekends have been hard to come by. We arrived for a late lunch but not once did we feel rushed or that we were outstaying our welcome which really added to the experience, as so often you’ll find you have an allocated time at some premiere establishments. Bourgee featured low lighting, candlelight tables, giant lampshades, brickwork, fur like leather textures, ornamental flowers and decorative plants, bringing together an ensemble of both modern and classic structures. We were even seated by the extremely soothing waterfall feature, which alongside soulful music ensured the most relaxing experience, as well as a well positioned view of the bar where head barman Jay and his team put passion and performance into every lovingly made cocktail.

We wanted to know which cocktails went down a storm at Bourgee and we couldn’t have been happier with the first round, a pornstar martini and lychee martini served in 1940’s style glasses. We would describe them both as fruity and extremely easy to drink a little too fast, so with such amazing service we were asked if we would like to order more in between as we began tucking into teasers. Almost as if the staff were trained to sense what their customers would favour, we were recommended the bourgee punch and the womble, with the punch taking us back amidst a summer sensation and the womble jumping on the bandwagon, with similar tones to a daiquiri. A recommendation from our main host Simone (who in my eyes demands a michelin star for her abilities to narrate the menu and the story of Bourgee as if it were a piece of creative prose,) for the teasers was pure brilliance. We welcomed the most premium tasting stone green olives, a really fresh tasting gazpacho with chunky chorizo pieces and their sought after lobster & cheese filled profiteroles, so light they dissolved like butter in the mouth and were served on an iron griddle pan to keep the cheese bubbling… I could definitely have eaten those for starters and that happened to come next. Wanting to fully explore the seafood selections as there was such a variety throughout the menu, we selected the tempura soft shell crab, accompanied by sweet and crispy kale and a mojito mint mayonnaise dip and the caramelised, garlic and butter grilled lobster bites with a side of toasted french bread. The lobster bites were a tray of cheese and garlic goodness as it spread unevenly across the bread, whilst the whole encrusted crab fell miraculously apart and the tang of the mint mayonnaise hit the roof of our mouths. Time for a breather? You could not frown to be seated anywhere in Bourgee, with intimate two seaters, soft to touch booths and leather sofa’s, it’s easy to see why they call themselves the luxe lounge. A divinely decorated venue, a mere 5 minutes from Chelmsford rail station, this truly felt like a humble abode and you could sense the passion from everyone we graciously came into contact with. Selso, restaurant manager, was eager to greet as many of his diners to ensure everything was to their satisfaction (5 Stars to his welcoming approach, leaving you feeling like you were part of the Bourgee family.) After more conversations about Bourgee’s rapid climb to success ever since 2014, we readily accepted some sorbet palate cleansers, with a cheeky dash of vodka for good measure, the sour and tart of the lemon & lime shooter, plus the sweet and cutting flavour of the raspberry vodka shooter meant our tastebuds could acknowledge mains. Feeling like guests in such relaxed and ambient surroundings, we were roused to be presented with a faux grass textured board packed with all of Bourgee’s finest cuts of meat and lobster, before we were briefed with the flavours we could expect from each. It felt quite playful and evoked excitement when prior to visiting I believed I had firmly made my dish decisions. Eagerly awaiting our mains, we ventured onto Bourgee’s own label wine which our hostess agreed would be paired superbly with our selected steaks. These included the Merlot, with its intense aromas of ripe blackcurrants and blueberry (this was delectably light,) and the Sauvignon Blanc, which captured refreshing aromas of citrus fruit and elderflower.

Proving that the king of the kitchen was the josper, I had the pleasure and challenge of withstanding the heat of the kitchen and hearing the sizzle of meat as it met with the grill, the sound was something quite seductive. Sometimes the taste of steak can get lost behind the heaviness of sauces, so I was attracted to Bourgee’s butters- balsamic, crispy bacon & cheese and caramelised red onion. The medium cooked plump fillet melted in my mouth whilst the succulent medium cooked rib off the bone embodied the smokiness of the bbq. The meats were teamed with rocket and potatoes but on this occasion we switched to the creamy dauphinoise potatoes and whipped garlic butter mash. It was a real treat mixing and matching the flavours from these plates, adding to that some roasted asparagus and buttered oriental greens. Yet somehow we still had space for Bourgee’s speciality half lobster, which came filled with shallots, woodland mushrooms and cheese that had already been expertly scooped and sealed, so that you needn’t break and crack away at it’s shell. When it seemed the end was in sight, we were easily persuaded to partake in another round of cocktails, some deluxe long island ice teas as we perched a dessert menu shockingly before us. Jay’s description of the mars bar cheesecake meant we weren’t disappointed with it’s moussey nougat centre, raspberry sauce, biscuit base and slices of mars bar on top. Plus the crunchy, caramelised pecan pie with maple and walnut ice cream, it’s fair to say Bourgee’s fun, self- indulgent and palatial attention to detail will keep visitors on their toes, with new elements of interaction, affordability and splendour. We’ll be back to try the ‘eyes bigger than your belly’ tomahawk on the bone (1kg) described as a sharer but we’ll definitely be eyeing that up as a food challenge… whilst holding everything else.