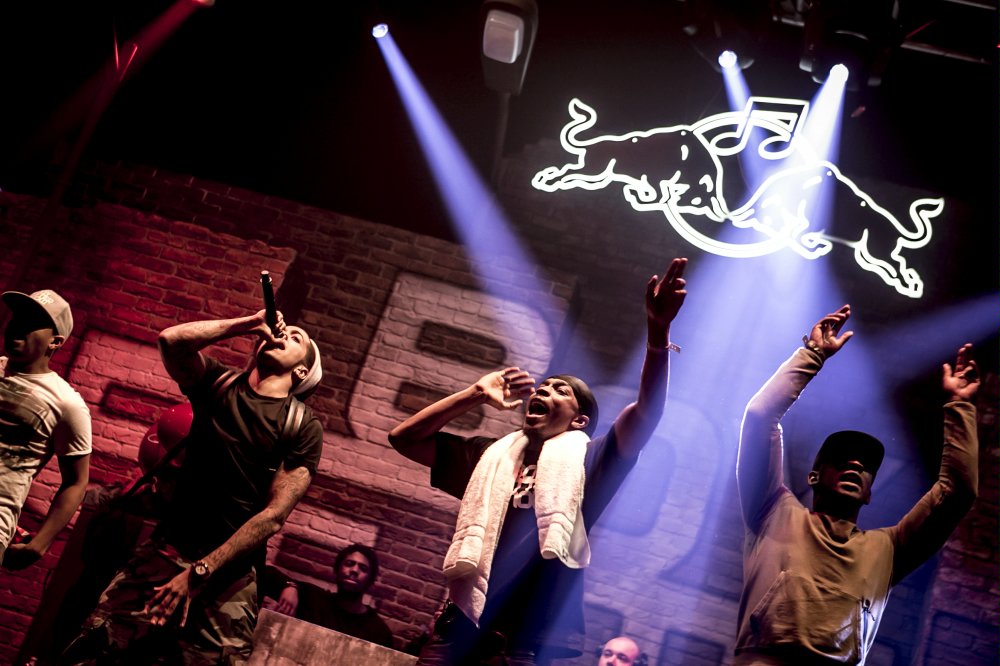 It was the first time Wembley Arena hosted four stages at one event with over 100 artists, 270 speakers, nine mixing desks, 14 CDJ mixers and 15 miles of cable brought in to ensure this was the largest party ever held within the arena’s walls. Only ever talk the talk if you can walk the walk and Boy Better Know did just that. The homegrown grime collective founded by JME, including Wiley and Skepta threw down the most fighting talk last night. Calling out every opposing team, they definitely knew what they were doing. Smashing the decibel meter, they took the Culture Clash trophy from reigning champions, Channel One. Hosted by Tim Westwood and Gemma Cairney, 7,000 fans turned out for the night that saw Digital Sound Boy provide the pre-event music.

Each crew spent months preparing for the bass-driven warfare, carefully selecting their weapons of choice and recording custom-made dubplate specials. They were given 15 minutes to win the screams of the crowds, with only 12 minutes to do so in the last set.

The four camps performed in a different slot each round and the arena resembled some sort of mental, musical experiment as the crowd flocked from corner to corner to get front row for each crew’s sets.

A host of celebrity fans turned out to watch the battle unfold, including BBC Radio 1’s Nick Grimshaw, Maverick Sabre, Wretch 32, Yasmin, and Oliver Proudlock and Spencer Matthews of Made in Chelsea. The apparent crowd favourites were Major Lazer and it seemed like they had the win in the bag at one point. Channel one operated on the system of experience and with 25 years of it, thought they had the clash won. Annie Mac presented the most special guests and it was perhaps this over-compensation that cost her crew the win.

Watching the decibel meter, it was close between the crews but the readings were verified and Tim Westwood announced that Boy Better Know were the 2012 Culture Clash winning sound.  Speaking on their win they said: ‘Man you don’t even know how we feel, it’s amazing right now! We’re gonna celebrate in 18 different ways, london won’t know what’s hit it!’ How did it all unfold though?

Round One: No Elimination
Channel One truly brought the culture to the clash, spinning a full vinyl set of analogue sounds in digital times. Team Annie Mac Presents’ strategic setlist was bound to get the crowd hype, including mixes of  tracks ‘Clique’, ‘Niggas In Paris’ and ‘212’ with Redlight kicking off the fighting talk. Throwing outright insults, Boy Better Know did not look impressed but the Red Bull Culture Clash audience went crazy when it was time for BBK to sound off. Round Two: The Selector
15-minute sets of selected tracks from each sound with no extras, special guests or custom dubplates. Channel One made it known to the opposing teams that they’ve been doing this from day one but it Major Lazer won this round with an impressive set that topped the decibel meter. The support for Diplo’s festival-tested soundsystem was big, with orange Major Lazer bandanas flying above everyone’s heads.

Annie Mac brought out Sam Smith, who provided vocals for Disclosure on track ‘Latch’. Boy Better Know played classics like ‘Duppy’ after calling out Major Lazer and Annie Mac for breaking the rules such as no custom dubplates or special guests until round four. Round Three: Sleeping With The Enemy
In the most controversial round of the night it was time to see who could out sound the other, with each sound playing sets comprising of tracks from the opposing crews. Winner, Annie Mac Presents, took things to the edge when they paused the set for a ‘message from Diplo’s sponsor.’ Making a mockery of his famous Blackberry advert, they played it into arena but the phone had been replaced with a pink dildo. Annie sure did present though, bringing out Maverick Sabre, who offered up a cover of Oasis’ ‘Wonderwall’. Ms. Dynamite took things back to the roots, challenging Channel One.

Perhaps over-confident, Channel One called out Major Lazer, who delivered with a tight set of reggae and ska hits, on their ‘global sound’. Seeing no need to change things up themselves they continued to play songs in this round that didn’t sound much different to their sets in the previous rounds. There was only the addition of some ‘grime influenced’ vocals perhaps in an attempt to rival Boy Better Know.

Sick of the other camps playing dirty, Boy Better Know decided to join in the games. ‘We all know who your special guest is,’ they quipped at Major Lazer before launching into Usher’s ‘Climax’. They also sounded off at Ms. Dynamite, calling her a ‘traitor’ for being on the Annie Mac Presents stage.

It all came to nothing in the end as Tim Westwood announced second and third round results were null and void as a result of cheating. All would be decided in the final round. Round Four: The Decider
Finally came the round in which custom dubplates and special guests should have first made their appearance. Sticking to the rules, Boy Better Know enlisted Chipmunk who took to the stage wearing his backpack and swing tags on his new hat. They also had help in the form of Lethal Bizzle who performed eternal hype-track ‘Pow’. BBK dropped in tracks ‘I Don’t Like’ which they systematically used to insult all three opposing sounds. They also went in on Channel One: ‘I heard Channel One have pork with their chips’ the collective slung across the arena over a special reworked version of Giggs’ ‘Talkin’ The Hardest’.

Annie Mac Presents went all out with special guests with Ms. Dynamite returning to the stage, Example dropping in and Katy B who performed ‘On A Mission’. Although BBK had played the track earlier on in the clash. Previous champions, Channel One enlisted the aid of special guest, Luciano, for the deciding round.

Major Lazer who seemed to drum up the most support throughout the night delivered their weakest set of the night, including ‘Smells Like Teen Spirit’. Rita Ora travelled across the city on a motorbike to make a special performance, arriving on stage complete with biker leathers and crash helmet before launching into ‘Facemelt’. Usher  then performed a one time reggae remix of hit ‘Climax’ with the Major Lazer soundsystem. Round Five: The Crowning
Boy Better Know came, sounded, and conquered. Crowned the champions of Red Bull Culture Clash 2012 it was down to the grime collective as the chosen sound to play out the night.

They’ll be back to defend the Red Bull Culture Clash title next year but against which sounds? Watch the victory celebrations, below.