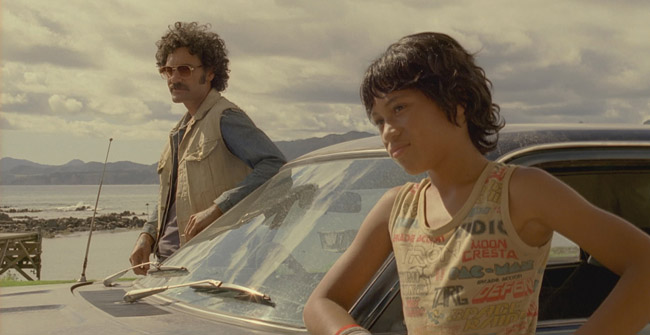 Before Taika Waititi hit the big time with the wonderful Hunt for the Wilderpeople and subsequently taking the helm on the latest venture of the Thor franchise with Thor: Ragnarok, he made his debut in his first full feature film having written, directed and starred in Boy, a film drenched in Waititi’s hallmark wonderfully warming wit and touching connectivity of human emotion.

A narrative engulfed in Boy’s (James Rolleston) idealistic view of a Father, absent from most of his young life, his love of Michael Jackson and a responsibility to his younger brother Rocky (Te Aho Eketone-Whitu),  after their mother died while in childbirth. Boy is set in 1984, in the rural backwater of East Coast New Zealand, Boy takes on the responsibility of looking after his younger sibling and cousins while their grandmother attends a funeral, serving up dinner and cleaning up after them all. Boy is the brightest amongst his Friends even if a little cocky whilst trying to impress the popular girl at school with his poorly attempted Moonwalk. Boy’s imagination runs wild when it comes to the vision of his absent Father, on a pedestal as a hero on the same level of Michael Jackson, So when the old man speeds down the dirt track with a couple of hapless goons by his side in a battered car surrounded by a cloud of marijuana, Boy is quietly ecstatic to see him. His Father Alamein (Taika Waititi), has a good reason for being less than a stable rock in Boy and Rocky’s life, he has spent the past few years behind bars. His convenient arrival is a double-edged sword. Not only is he there to see his boys but also to dig up the stash of cash he stole and buried on his mothers land, there’s just one hiccup, he can’t remember where he buried it.

Waititi’s charming coming of age story indulges in quirky sequences to portray Boy’s fantasy of his Father but in reality Alamein is a lazy bum, focused on his lost money, partying with his friends, even indulging Boy’s curiosity by handing him a sip of Beer but he has his Fatherly moments even if he fails to connect with the younger Rocky who blames himself for his Mother’s early death. As Boy slowly realises his Father’s isn’t the man he has conjured up in his own imagination and the rose tinted glasses begin to fall.

Simple and lovingly gifted with charismatically innocent performances from its younger cast members of Rolleston and Eketone-Whitu and a fantastically dense comedic outing from Waititi, Boy’s homely overtones connects in a way so many others fail to achieve in a recognizable coming of age tale.

Boy is available in cinemas on 13th October and on digital download on 27th October.