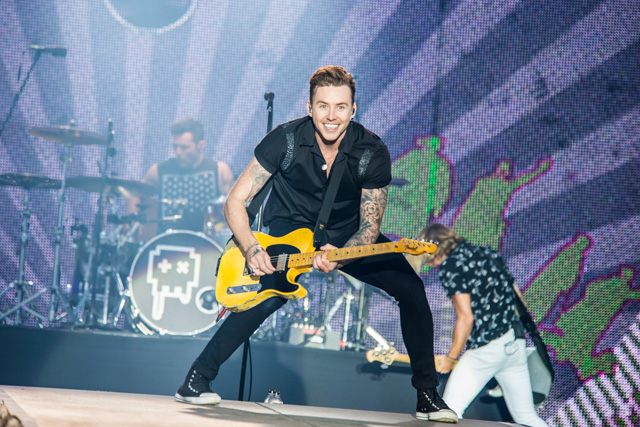 McBusted, a very well known band in the UK were the main act for Lytham Festival. This was massive for the people of Lytham. It was the first time I’ve ever been to a festival so I was unsure what to expect.

I travelled up from London with my friend early on Saturday morning and arrived in Blackpool a few hours later. We decided to walk around Blackpool and check out what it has to offer such as Blackpool beach, the arcades and the famous piers.

Lytham Festival included acts such as Calum Scott, Hometown, Karen Harding and obviously the main act McBusted. Ironically McBusted and Hometown both have six members and they weren’t going to let the people of Lytham go away disappointed.

Lytham Festival was a big opportunity for Calum Scott to show people how far he has come since being a finalist on the hit show Britain’s Got Talent.

A new boyband called Hometown who are managed by Louis Walsh had time to show Lytham what they’re about! Hometown members Josh, Cian, Brendan, Dayl, Dean and Ryan got the crowd buzzing and excited for what else Lytham Festival had to offer. Hometown surprised me with how talented they were, singing and stage presence wise. These incredibly talented lads from Ireland performed their own songs ‘Where I Belong’ and ‘Cry for Help’ whilst also performing covers for those who may not of heard their music before. If you haven’t heard of them, I suggest you look them up because these boys are going to be massive!

Soon after Hometown performed, McBusted lightened up the crowd even more by their incredible performance. McBusted had a kiss cam that made the atmosphere more enjoyable than just watching a full on set. Hometown have been supporting McBusted on all their summer shows. McBusted have an incredible stage presence that may not be for people of a young age but the humour made the audience have a more enjoyable time at Lytham Festival!

The atmosphere of the festival was an amazing thing for my friend and I to experience. It wasn’t like one of those messy festivals where there’s a fight every two minutes, it was a nice and fun atmosphere that made my whole experience more enjoyable. I’d suggest that you wouldn’t want to miss out on next year’s festival, whoever the acts are.