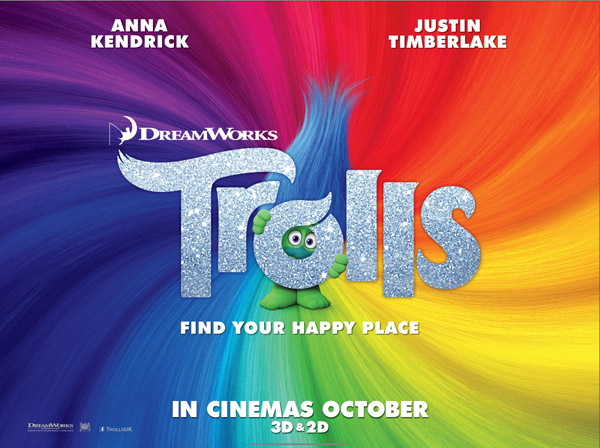 BBC Radio 1’s Greg James takes on the character of avid skateboarder Aspen Heitz “Delighted to be making my DreamWorks’ debut alongside Justin Timberlake and Anna Kendrick in Trolls. I only have one line… But WHAT a line it is.”

The role of Mandy Sparkledust will be played by model and mother Abbey Clancy “So excited to be involved in DreamWorks’ upcoming film Trolls alongside such a wonderful cast. It was so much fun to be part of. My little girls can’t wait to watch and see if they can spot mummy’s voice.”

YouTube sensations Connie Glynn (@noodlerella) and Carrie Hope Fletcher (@CarrieHFletcher) round out the UK voice cast playing fun loving Trolls Moxie Dewdrop and Cookie. Connie Glynn said, “I had such a fun time voicing the character Moxie, I can’t wait for everyone to see her in action!”

Actress and author Carrie Hope Fletcher said, “I was thrilled to be asked to voice the role of Cookie, it’s such an honour to be part of such an incredible cast”.

TROLLS IS OUT IN UK CINEMAS ON FRIDAY 21 OCTOBER